Lady Flames use balanced attack in sweep of Tri-City Selects 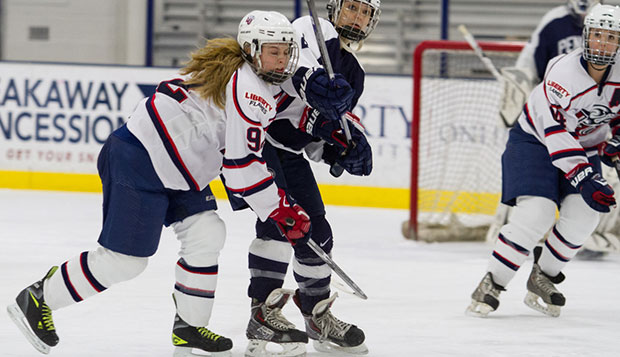 Liberty sophomore forward Courtney Gilmour collides with a defender in a recent contest at the LaHaye Ice Center.

As it makes final preparations for the March 4-8 ACHA Division I National Championships, Liberty University's DI women's hockey team received a better challenge this weekend from Tri-City (N.C.) Selects than it had the previous two series against Division II opponents Navy at home and Buffalo away.

After sinking the Midshipwomen and burying the Bulls four games in a row by a combined score of 51-0, the Lady Flames (26-4-1) notched two more shutouts, by 4-0 totals both times, Saturday and Sunday afternoons at the LaHaye Ice Center.

"It was good for us to have a couple more games to get us ready for nationals," said Lady Flames senior forward Jenny MacArthur, who scored a goal in the first game and added an assist in the second. "Our offense is working really well together and our whole team has improved from the start of the season. I'm excited to go to nationals with this group. We've got girls who are stepping up, everybody's healthy, and we're all ready to go."

On Saturday, senior goalie Chantal Lischynski made 19 saves in posting her sixth shutout of the season, improving to 11-1 on the year, before senior Sam Rupp stopped 17 shots to stifle the Selects in Sunday's rematch.

Freshman forward C.J. Tipping netted first-period goals in both games, the first unassisted to start the scoring in the opener and the second off feeds from senior defenseman Madi Fischer and junior forward Carrie Jickling to extend the Lady Flames' lead to 3-0.

Jickling stayed in front of senior forward Sarah Stevenson as Liberty's regular-season scoring leader with goals in both games, bringing her total to 35 goals and 21 assists. She scored the third goal unassisted in the second period of the opener before netting the first goal on Sunday for her team-high fifth game-winner of the year.

The Lady Flames, ranked second in the first three ACHA DI regular-season polls behind only defending national champion Miami (Ohio), will find out where they are seeded and who they will face in their four-team National Championship pool when the fourth and final ranking is released on Tuesday. The top eight teams qualify for the trip to York, Pa.