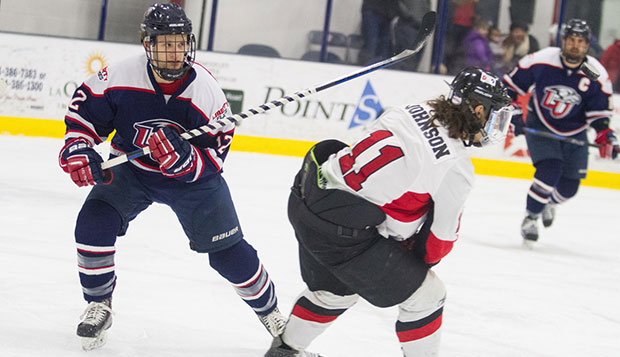 A night after ending the Beavers' 18-game winning streak, the 11th-ranked Flames completed their second home sweep of an ACHA opponent this season on back-to-back weekends at the LaHaye Ice Center with an electrifying 3-1 victory.

"To be honest, we're playing our best hockey right now, which is big for us," Liberty Head Coach Kirk Handy said. "We've had it dialed in for the last few weeks so it was really nice to see our guys to be able to perform at a high level for two big games this weekend. It was a neat thing to see the progression in our team this year and to see us hitting our stride at the right time."

Senior forward Ryley Egan scored the game-winning goal on a high-energy scramble around the Beavers' cage with 7:22 remaining in regulation. Later, in the final 10 seconds of play, freshman goalie Josh Halpenny made a pad save and his defensemen, including seniors Ryan Kerr and Cam Bakker, shielded the goal around him during a crazy scrum in front of the Flames' net, preserving the one-goal lead.

"We've had to really try to battle through a lot of injuries this year and this is the first time we've had some consistency, not only in our lines, but in goal," Handy said. "I'm proud of our guys and I'm proud of the effort because that's what it's going to take to win at nationals."

For the fourth time in their home-and-away series split this season, Liberty recorded the game's first goal, this time off the stick of sophomore forward Robert Ward.

Following a faceoff in the right circle, Flames sophomore defenseman Grant Garvin chased a loose puck through the right circle and checked Minot State forward Lyndon Lipinski against the boards. That freed the puck to Egan in the right corner where he spotted Ward open at the top of the circle. He trapped the pass and unloaded a slap shot that blistered past Beavers goalie Connor Beauchamp inside the left post for a 1-0 lead with 11:27 left in the first period.

Minot State had a golden opportunity to net the equalizer on a power play in the final minute of the period when forward Sam Briscoe received a through pass from defenseman Mitchell Peeke to the left of Halpenny. However, his redirected shot toward an open net clanged off the left post and across the goal mouth before being cleared and Liberty clung to the one-goal advantage.

A night after sophomore Matt Pinel gave up just one goal on 27 Minot State shots, Halpenny made 33 saves as the Flames were outshot 34-31 in the defensive duel.

"Our goaltending's been phenomenal,"  Handy said. "Matt and Josh had big weekends for us."

Halpenny had a series of spectacular stops midway through the second period, starting with a kick save of a backhanded turnaround shot by Cole Olson in front of the cage. Moments later, on a quick three-on-two break, Briscoe sent a pass to Jeremy Johnson in the left crease where Halpenny blocked his high shot near the left post. He later kick saved a shot by Johnson through the left circle before smothering the puck with a head-first dive after Minot State's Craig Fournier sent a wraparound pass from behind the left post to Dillon Smith out in front.

But with the two teams battling four-on-four with 2:32 left in the second stanza, the Beavers finally broke through to tie the contest on a counterattack following a Liberty fast break. After Liberty sophomore defenseman Chase Harris stole the puck with a poke check, Austin Yano won it back at the top of the left circle and sent a cross-crease pass to Brett Nespor who netted his fourth goal in four games against the Flames.

Liberty generated the better scoring chances in the first half of the third period, but couldn't capitalize on back-to-back power plays, with Beauchamp getting a blocker on a sharp-angled shot by Garvin near the end of the first man-advantage opportunity.

Moments after Minot State killed the second penalty and Liberty killed one of its own, the Flames went on a three-on-two break with the teams battling four-on-four, resulting in the winning score. Junior defenseman Steven Bellew started the odd-man rush on a counterattack off his own end line, joined by Egan and fellow senior forward Lindsay LeBlanc. Egan pounced on a loose puck in the right crease and put away a backhanded finish after LeBlanc had taken a couple stabs at it.

"I was just kind of in the right place at the right time," Egan said. "Everyone was digging and it just popped out to me and I put it in the net."

The Flames had to kill off one final penalty when Halpenny was called for interference in the final 2:50.  He stood tall in the end, making the pad save of a shot through traffic out in front during the Beavers' mad rush on the net in the closing seconds.

Senior Christian Garland won the ensuing faceoff from Smith and launched a shot from behind the red line into the open net for the final score with 4.7 seconds to go.

"It's a great team win," Egan said. "It gets the confidence up and it's a good time to have confidence. Hopefully, it carries right into the tournament."

With a first-round bye as one of the top 12 seeds, Liberty will face sixth-seeded Ohio in the second round of the ACHA DI National Championships near Cleveland, set for Saturday, March 7, at 10 a.m.