No. 11 Flames burn No. 3 Beavers early and often in opener 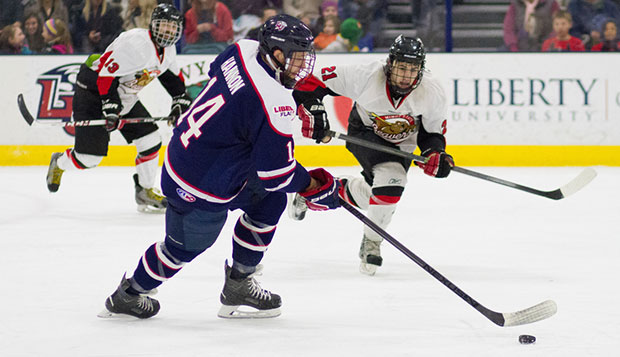 In his first game back from Spain, Liberty freshman forward Luke Hannon scored a goal and distributed an assist in Friday night's 5-1 win over Minot State at the LaHaye Ice Center.

"It was a complete game for us tonight," Flames Head Coach Kirk Handy said. "Our team played very well for 60 minutes. We had excellent goaltending, our defensive corps played well, and we scored some big goals in front. All four lines were going tonight. It was a solid effort. I was proud of our guys tonight, proud of our coaching staff. It was a complete team effort."

On Senior Night, the 11th-ranked Flames (24-11-4) got a goal and an assist from senior forward Ryley Egan and freshman forward Luke Hannon, in his first game back from playing for Team USA in the World University Games in Spain. Liberty also received two assists from senior forward Lindsay LeBlanc, the ACHA DI leader in assists with 49, and a goal from senior defenseman Cam Bakker, the second-highest scoring defenseman in club history.

"It's exciting to have our guys back," Handy said. "We feel really good. Luke Hannon said, for the three weeks that he was gone, the intensity in practice really picked up. I thought our lines really solidified themselves and it was a solid effort tonight. It's nice to see (the Flames' hard work) pay dividends for us."

"Pinel played really well tonight," Handy said. "He deserves a lot of credit. He made some big saves tonight. We believe in all of our goalies, we believe in everyone inside of that locker room."

Less than a minute and a half into the contest, Egan made a brilliant tip of a shot off the stick of sophomore defenseman Chase Harris from near the right blue line, deflecting the incoming puck from the right end line into the upper netting past Beavers keeper Riley Hengen.

Then, with the Flames on a power play with 11:28 left in the first period, Hannon sent a pass from the top of the left circle to Bakker, left open deep in the right circle, where he threaded a shot between the blocker of Hengen and the left post for a 2-0 lead.

Liberty extended its advantage to 3-0 with just under three minutes left in the period when Egan received a pass from sophomore forward Grant Garvin and sent a cross-crease pass from the left circle onto the tape of the stick of a cutting Robert Ward, who redirected the puck inside the left post from point-blank range.

Minot State got one goal back in the final five seconds of the first when the Beavers stole the puck on the defensive end and started a three-on-one counterattack, with freshman forward Craig Fornier sneaking a one-on-one shot past Pinel into the lower left corner of the cage.

The Flames took advantage of an own goal, when Hannon's shot from the left boards deflected off the skate of Minot State defenseman Bob Pond, to stretch its lead to 4-1 with 4:49 left in the second.

Liberty remembered what happened when it took a three-goal lead into the third period of its first game at Minot State on Oct. 10, as the Beavers battled back to win in a shootout, but it didn't dwell on that.

"That was so long ago," Handy said. "Our team has matured this season and we're a totally different team now."

The Flames kept the pressure on Minot to start the third period and Hannon all but iced the victory by netting a fifth goal in the opening 75 seconds. Left alone out in front, Hannon received a through pass slid through the crease by LeBlanc and pocketed the rebound of his forehand miss inside the left post with a backhanded chip shot. After being congratulated by his teammates, Hannon saluted President Jerry Falwell and his wife, Becki, who had invited several students to watch the last period of the game from their box.

Handy wants to make sure the Flames stay focused for Saturday's rematch, when the puck will drop at 7 p.m. in LaHaye, as they get one last contest in preparation for the March 4-10 ACHA DI National Championships near Cleveland.

"That's a good hockey team over there and we've got to be ready to go because they'll be rearing to go again," Handy said. "It'll be a great game again tomorrow."

Admission to Saturday's game will be free in recognition of Fan Appreciation Night. 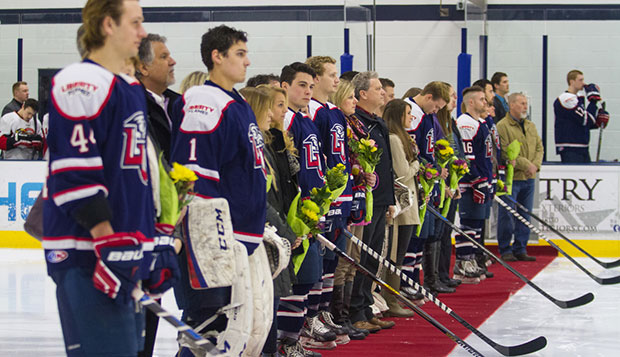