Flames to face No. 3 Minot St. in finale, No. 6 Ohio in playoffs 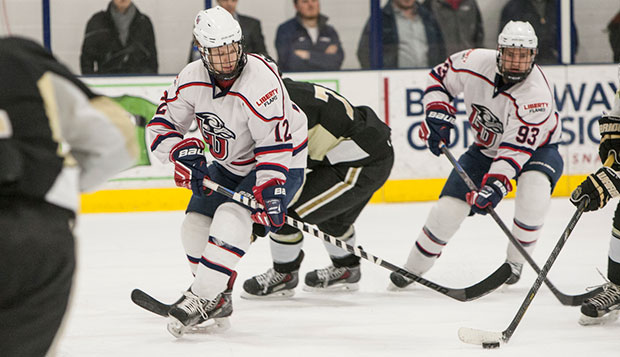 Liberty senior forwards Christian Garland (12) and Ryan Kerr (93) will play the last games of their ACHA DI careers this weekend at the LaHaye Ice Center.

While most ACHA Division I men's hockey teams throughout the nation are competing in their conference tournaments this weekend, Liberty University welcomes No. 3 Minot State, the only other Independent program to qualify for the March 5-10 National Championships.

The series is a preview of a potential third-round playoff matchup between the 2013 national championship Beavers, who swept the Flames on Oct. 10-11 in Minot, N.D., and a Liberty squad which bumped up two spots to No. 11 in this week's final regular-season ACHA DI computer rankings and is hungry for its first national title.

During Wednesday night's ACHA DI National Championships Reveal Show, hosted by defending tournament champion and No. 1-ranked Arizona State University, the 11th-seeded Flames found out they would face No. 6 Ohio (25-6-5) in the playoffs' second round, set for Saturday, March 7, at 10 a.m. at the OBM Arena in Strongsville, Ohio. Strongsville, a suburb of Cleveland, is more than a three-hour drive north of Athens, Ohio, home of the four-time national champion Bobcats who eliminated Liberty in the second round of the 2013 national championships.

If they can upset Ohio, which swept Liberty on Jan. 23-24 at the LaHaye Ice Center, and Minot State advances past the winner of the first-round battle between No. 14 Davenport and No. 19 Villanova, the Flames would challenge the Beavers, March 8 at 10 a.m., with a berth into the ACHA Final Four on the line.

Liberty Scouting Report: As they prepare for their eighth ACHA DI tournament appearance in nine seasons at that level, the Flames are finally injury-free and at full strength.

Freshman forward and ACHA DI scoring leader Luke Hannon (34 goals, 39 assists) has returned to Liberty's top line after spending the past three weeks with Team USA competing in the World University Games in Spain, where he distributed five assists and scored two goals, hitting the post on a potentially game-tying shot in a 5-4 shootout loss to Slovokia.

Six weeks after sophomore forward Robert Ward rejoined the team to start the second semester, freshman forward Luke Simon and junior forward Danny Logan were back on the ice fully rehabilitated from injuries that sidelined them for nearly half the season.

Egan, who is expected to play in his club record 150th game on Saturday, has scored seven goals in the past four games, starting with a four-goal night when he set the record for most games played. The Flames lead the league with 184 goals scored.

Pinel, Byron, and freshman Josh Halpenny (5-4, 2.62 GAA, 91.5 SP) helped the Flames stage back-to-back shutouts against the Mountaineers, marking the first time Liberty had accomplished that feat, and completed a home sweep, since Sept. 12-13 against the Richmond Junior "A" Generals.

Minot State Scouting Report: Since dropping the opener of a two-game series at ASU on Nov. 13, the Beavers, have been the hottest team in the nation, winning 18 games in a row. They will be making their first appearance in LaHaye, returning the favor to the Flames who visited Minot on their first road trip of the season.

Defensively, Minot State returns 6-foot, 3-inch, 205-pound Nick Zern, who also represented Team USA in Spain. The Beavers have two goalies who do a workmanlike job of damming the cage — Connor Beauchamp (10-1, 2.18 GAA) and Riley Hengen (18-6, 2.41 GAA), both of whom boast a 92.2 save percentage and have posted two shutouts.