Flames bunker down on front lines at MSCC No. 3 in Georgia 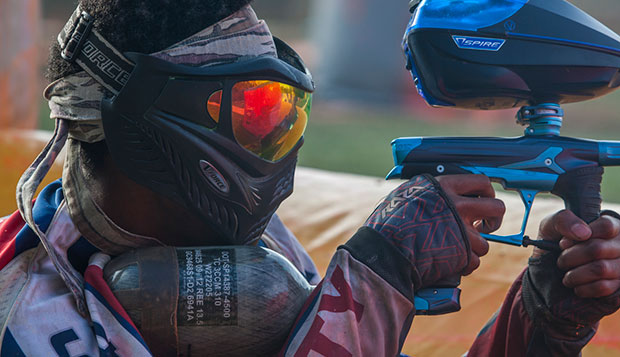 The four lines on Liberty University's paintball team fought to third-, fifth-, eighth-, and 12th-place finishes out of 12 teams at Saturday's MSCC Event No. 3 in Canton, Ga.

Kennesaw State swept first and second place in the tournament waged on its home turf. Besides, Liberty, which made up a third of the field, the event drew teams from Clemson, Georgia State, Georgia Tech, High Point, Lynchburg College, and Virginia Tech.

"At the MSCC Class AA Event No. 1, Kennesaw came to our field and we ended up beating them for third place, so they got their revenge on us," Flames Head Coach Brian Davidson said. "We competed well, but they were better on this day. There's a bit of a rivalry between us. We beat them once, now they've beaten us, so we'll see who's the better team if we meet them again at nationals."

Liberty, ranked in a three-way tie for first place with Texas A&M and SUNY Oswego in the Class AA national poll, was led by its gold line of Christian Campbell, Bobby Majuk, Aaron Thompson, Kyeneil Tippett, and Christopher Smith. They were the sixth and final team to advance out of the preliminaries to the quarterfinals, but went on to finish third after avenging a 2-0 setback to Virginia Tech in pool play with a 2-0 triumph over the Hokies in the quarterfinals. The Flames then lost a 2-0 skirmish to Kennesaw's gold line before regrouping and defeating High Point, 2-0, in the third-place match.

The Flames' fourth line — their white squad made up of freshmen Gabe Carter, Joshua Okuda, Tyler Smith, Eric Stupulman, Brandon Terrell, and Ethan Strickland, who played well on the snakeside — placed eighth after dealing Kennessaw's gold line its only defeat of the day in prelims.

"They had some good strategy and made some really good plays," Davidson said. "All those guys are new this year, they just joined in the fall and have come a long way. At their last event, they only won one point, so to come in eighth place out of 12 teams was really good for them."

Liberty's red line, its second-ranked group, was placed in the toughest bracket and was eliminated in prelims, winding up 12th.

The Flames will enter their gold and blue lines in a Class A event, Feb. 28 at the Liberty Paintball Fields, where teams from East Carolina and North Carolina State have committed to compete.

Liberty is considering traveling to MSCC Event No. 4 on March 28 before taking all four lines to the April 17-19 National Collegiate Paintball Association championships in Lakeland, Fla., where more than 50 Class A teams and another 50 Class AA programs will battle for national titles.