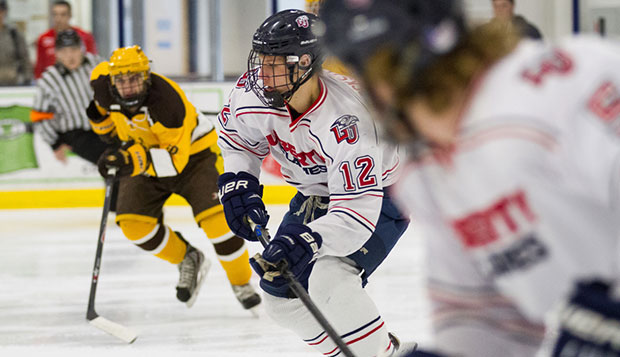 Blue Hens center Trevor Richmond snuck the puck past Flames goalie Blair Bennett at the 18:19 mark before Mark Zeszut — the eventual tournament MVP after Delaware defeated Rowan 6-2 in the final — netted a one-timer in the slot just 15 seconds later. Five of the game's seven goals were scored in the first period.

"They went up two goals pretty quick," Liberty Head Coach Chris Lowes said. "On the first one, (Richmond) walked out of the corner and jammed it in on Blair. The second one came after a bad turnover. (Zeszut was) trailing the play and he came right down the middle of the ice. They found him wide open and he put a real nice shot past Bennett stick-side."

Delaware goalie Lewis Brotman snuffed a point-blank shot by junior forward Paul Ingles off a back-door pass from Ben Freymond before Bennett and Brotman both made saves off odd-man rushes midway through the period.

Adam Gnatowski appeared to get the Flames on the scoreboard with 8:47 left in the first, but his rebound in front was called back when it was ruled the puck crossed the goal line a split second after the cage came off its moorings. But 30 seconds later, fellow sophomore defenseman Ryan Sidun received a centering pass and launched a wrist shot from the top of the circle the caromed off the crossbar and in, trimming the deficit to 2-1.

Just over a minute later, Delaware's leading scorer Nathan Marks skated down the ice and beat Bennett to the low blocker side to extend the lead to 3-1. With Ingles screening Brotman in front of the cage, sophomore forward Devon Docksteader lined a forehand wrist shot through traffic to make it a one-goal game with just under three minutes left in the period.

The second period was scoreless before Ingles netted the equalizer from a tough angle while falling down with just 0.6 seconds remaining.

Then, midway through the third, Zeszut got the game-winner for Delaware, capitalizing on a turnover in the Flames' defensive zone with a one-timer into the top corner.

"They were sending guys from the blue line in when they had possession, we missed assignments and left (Zeszut) wide open in the slot, and they made us pay," Lowes said. "That's the excitement and also the danger of playoff hockey."

There's a good chance the Flames, who expect to be the fifth or sixth seed in the final Southeast Region rankings released this week, could face the Blue Hens in the Southeast Regional tournament, set for Feb. 28 and March 1 in Warwick, Pa.

"We're going to challenge the guys to be mentally focused, eliminate the defensive mistakes, and work on being more attack-minded and creating more scoring chances," Lowe said.