Flurry of goals continues for Lady Flames in sweep of Buffalo 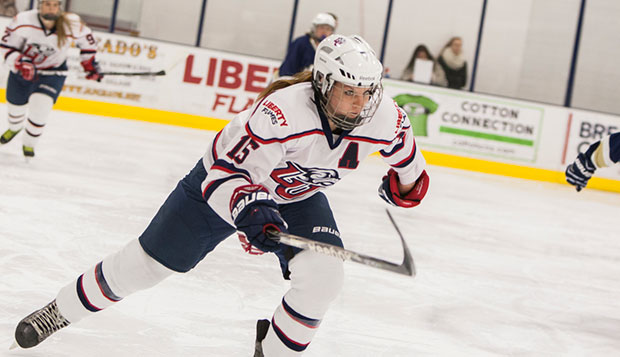 While Lynchburg saw its first real snowfall of the New Year on Saturday night, it was nothing compared to what Liberty University's ACHA Division I women's hockey team witnessed first-hand in Buffalo, N.Y., this weekend.

"It's snowing pretty heavy up here," Lady Flames Head Coach Paul Bloomfield said, noting there were drifts of up to five feet along the downtown streets and accumulations of at least three feet on the sides of the road on the late-night, nine-hour bus ride back home.

For the second weekend in a row, Liberty unleashed a blizzard of goals in back-to-back shutouts, sweeping the Bulls 14-0 on Friday and 4-0 Saturday after unloading 33 goals to destroy Navy at home last week.

Senior Chantal Lischynski recorded her fifth shutout of the season in the first game before junior Kristina Toppazzini notched her fourth on Saturday.

The Lady Flames outshot Buffalo 81-8 in the opener — when senior forward Amanda Grainger matched her second hat trick in three games with three assists — and by a 64-9 margin in the rematch.

"The girls really played well last night, just phenomenal with next to no penalties," Bloomfield said. "We basically dominated the game, controlled the puck, and moved the puck.

"It was a tough game tonight," he added. "Everybody was working just as hard. We probably rang five or six off the posts, so we had the opportunities to score. The bounces just didn't go our way."

For both contests, Liberty's players used teal tape on their sticks and pads in honor of Jennifer Fowler, the mother of junior forward Sarah Fowler, who died last week and was buried on Saturday after succumbing to ovarian cancer.

Liberty returns to the LaHaye Ice Center next weekend for two games against the Tri-City Selects, a 19-under travel team, in preparation for the ACHA DI National Championships in York, Pa.