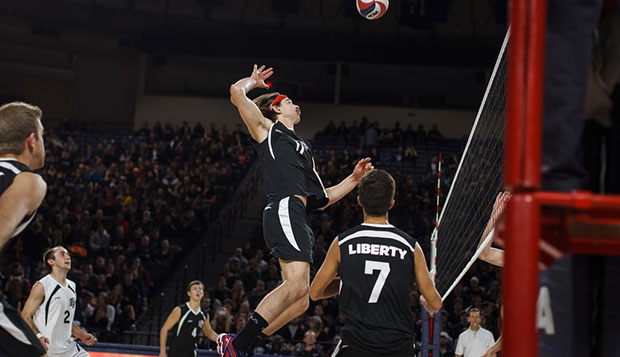 Close to 3,000 people flocked to the Vines Center late Friday night, decked in "Blackout" apparel to watch Liberty University's men's volleyball team become the first Club Sports program to play an official game in that arena as they tried to slay the Scarlet Knights.

"It was a little disappointing for us, but it was a great experience," added Kevin Snyder, a graduate student and opposite-side hitter. "I want to say a huge ‘Thank you' to Club Sports, which rolled out the red carpet for us to play here and we really appreciate it. The turnout was incredible. That type of environment is what every college athlete wants to play in."

Snyder was pleased with the way the Flames performed in the spotlight, battling toe-to-toe with the Scarlet Knights from the first point of the opening game — when Luke Werth spiked a short set from fellow freshman Nick Williamson for a kill — to the final point of the fifth game.

"Last year, we played in front of about 300 fans in the Schilling Center and we got a little rattled, so as a captain, I was worried about how the team would react," Snyder said of being backed by more than 10 times as many people. "I wondered if we would get rattled again tonight, but we weren't rattled at all. We fed off the energy from the crowd."

The late-night adrenaline rush took something out of Snyder, who struggled with muscle cramps midway through the match.

"My calves started cramping up in the third or fourth game, but I wanted to gut through it and put on a good show," he said.

Liberty sophomore Si Hershberger spiked a kill of a set by junior libero Josiah Williams for an early 6-5 lead and Snyder put down an assist from sophomore outside hitter Jacob Outten for a 9-8 edge in the first game before junior middle hitter Sam Eisbrenner made a block and spiked a kill to extend the Flames' advantage to 14-11. Hershberger would eventually dink a winner over the net and into a hole in the Scarlet Knight's defense on game point for a high note on what would be an up-and-down night.

After dropping the second game, kills by Werth, Williamson, and Eisbrenner got Liberty out to an early lead before Snyder's spike bounced off Rutgers' defensive specialist on the back row into the crowd to make it 11-8 in favor of the Flames.

Later, after a kill by Rutgers junior middle hitter Alex Szablewski, the reigning EIVA Most Valuable Player, put the Scarlet Knights up 24-23, Werth spiked a kill off a short set from Williamson, who put the Flames on top to stay with a winner off a pass from Snyder.

Liberty rallied from 13-9 and 20-17 deficits to set up two match points in the fourth game, but Szablewski spiked a kill off a block to tie it before Snyder's spike off the net landed just wide and Werth hit just long, forcing a fifth and deciding game that Rutgers led from start to finish.

Rigg wouldn't be surprised if the match was a preview of a showdown in this year's East Coast championships.

"They lost their libero, but they've reloaded and they're about the same as last year," he said. "They were clicking on offense as well as last year. It could be us against them in the East Coast semifinals or championship match this year."

"We saw a lot of good teams in the preseason, but Rutgers is a great team," Snyder added. "They lost a couple players, but from what I saw tonight, they're as good as last year, if not better. They won in a hostile environment. They knew how to come in here and not get rattled, which was great for them."

The Flames (1-1, 16-3-2 including fall play) return to the LaHaye Multipurpose Center on Feb. 14 when they will host an EIVA Play Date in preparation for the EIVA South Division I and East Coast Championship tournaments.