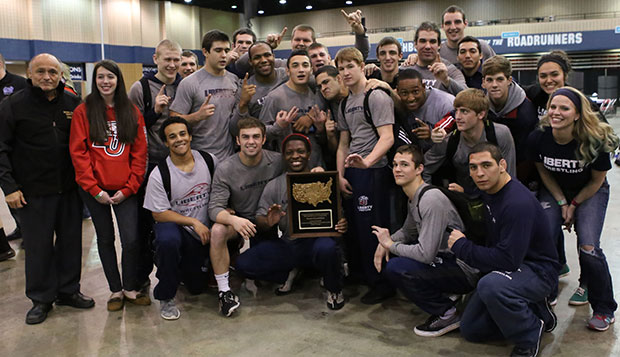 Liberty University's wrestling team captured its second NCWA National Duals championship in its four seasons in the league in impressive fashion, Saturday at the Northwest Georgia Trade and Convention Center in Dalton, Ga.

"It was very gratifying, even more than in 2012," Head Coach Jesse Castro said. "That year was a transition year for us, and we still had six guys that had Division I experience on the roster. We don't have any … right now, so for this group to do this, it means a little more."

The Flames managed to roll to a 6-0 record in dual matches despite using several of its reserve wrestlers.

"It was a very stressful tournament because we still didn't have three of our main guns in there," Castro said.

Liberty, the tournament's top seed, won its quarterfinal match over North Florida in a 54-12 landslide. The Flames swept their first seven matches, including five by fall — two by sophomores, Tim Nordan at 125 and Ike Podell at 141, and three by freshmen, Tyler Sigler at 133, Michael Bryant at 157, and Cody Richmond at 165, with the other two coming by forfeit.

After North Florida sandwiched two pins of its own around a third loss by forfeit, Liberty graduate heavyweight Josh Pelletier concluded the match with a sixth pin, decking Phillip Morency in 1:28.

Then in the semifinals against fourth-seeded Central Florida, the Flames survived their toughest test of the tournament to emerge with a 23-15 triumph.

After opening an early 17-0 lead on the Knights, winning their first four matches — including a 10-9 decision by Nordan over in Justus Griffith overtime at 125 and a pin by Podell over Alex Rivera in 3:00 at 141 — Liberty lost its next five bouts by decisions of three points or less from 157 to 197 pounds as it watched its lead shrink to 17-15.

"That match really could have gone either way," Castro said. "They wrestled well. They won a few one-point matches and beat three of our All-Americans — Chase Boontjer (at 157), Keyshaun Ward (at 184), and Matt Reynolds (at 197). They were all close matches."

With their third trip to the NCWA National Duals finals in four years hanging in the balance, Flames sophomore Evan Canady padded the lead with a 1-0 decision over Tyrell Walker before Pelletier cemented the victory with a 6-5 decision over Angel Perez at heavyweight.

"Evan's win was pivotal because (Walker is) the No. 1-ranked kid in the country at 235," Castro said. "That gave Pelletier a lot of leeway at the end there. He just couldn't afford to get pinned (to secure the team win)."

Then in the championship final against Mid-Atlantic Conference rival Apprentice School, a rematch of the Flames' 40-12 first-round win over the Builders in the Virginia Duals on Jan. 10, Liberty won nine of 11 matches, including two by fall and one by forfeit, in a 37-9 blowout.

Nordan gave the Flames an early 3-0 lead with a 10-9 overtime decision over Jacob Michael at 125 before Mike Holcomb put the Builders on top, 6-3, by pinning Sigler in 3:54.

Liberty sophomore Ryan Diehl, the reigning NCWA Wrestler of the Year, won his only match of the tournament, by forfeit at 141, to put the Flames back in front to stay. Josh Sanders edged Robert Saunders, 3-2 at 149 before fellow senior Chase Boontjer extended Liberty's lead to 18-6 with his third-period fall over Patrick Foxworth at 157 in 6:55. Freshman David Abbadusky then dominated Apprentice's Patrick Foxworth by 16-4 major decision at 165.

After the Builders' Landon Leithhauser won by 10-7 decision over Josh Sturgill at 174, the Flames wrapped up the national championship by winning the final four bouts — three by decision and a pin by Canady in 1:26 at 235.

Canady has been a proven point-winner for the Flames throughout his sophomore season.

"He's pretty consistent," Castro said. "He's placed in every tournament he's been in and to have him and Pelletier as bookends at the end of our lineup is really important for us as we go to the (NCWA) tournament in March."

With 24 bonus points for capturing the NCWA National Duals team title, the top-ranked Flames will be considered favorites heading into the final event of the season, the NCWA National Championships, March 12-14 in Allen, Texas.

"Especially if we get everybody healthy and in the weight class they need to be at, I'm confident," Castro said, "but not overconfident."

Liberty finished third in the NCWA National Championships in 2012 and 2013 and runner-up last season to Grand Canyon, which has since moved up to the NCAA level.