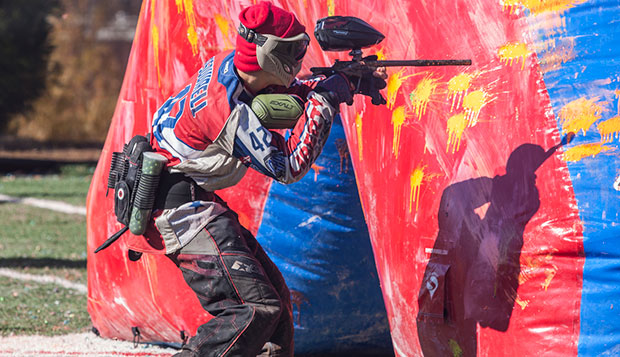 Sophomore Dorito side player Christian Campbell advances beside a bunker during the Flames' Class A tournament on Saturday at the Liberty Paintball Fields.

Competing in its only Class A tournament of the fall, the four-team MSCC Class A Event No. 1, Liberty University's paintball team's Gold line finished undefeated in its final home event of the season, Saturday at the Liberty Paintball Fields.

"We host a Class A event every year, once a year, so it was good to win it," Flames Head Coach Brian Davidson said. "We've hosted before and haven't won, so it's a good feeling. We worked well together. I don't think we were ever down in points. We were always ahead."

The Flames placed first in the race-to-7, 20-minute game event, sweeping Maryland, 5-1, East Carolina University, 3-2, and North Carolina State, 5-1, in the preliminary rounds before facing the reigning Class AA national champion Wolfpack again in the championship and winning by a 3-1 count.

"ECU and N.C. State were pretty comparable," Liberty Head Coach Brian Davidson said. "They were both good teams. We just had N.C. State's number. It didn't matter what they did, we just beat them. It was great."

"This will help us get ready for nationals and do our best," added Christian Campbell, who played on the Dorito side.

Liberty had 13 of its 25 players available to provide reinforcements for the top line, but relied heavily on the combination of seniors Aaron Thompson, who played extremely well on the snakeside, Bobby Majuk, and Kyeneil Tippett, and sophomores David Dickerson and Campbell.

Campbell said the key to the Flames' success was their rapid fire attack and containment strategy.

"We definitely played strong together," Davidson added. "Communication was very important. We laned really well (fired in lanes between bunkers, anticipating the opposing attackers' next move) and our gun skills were really good."

Junior Chris Smith filled in for Tippett during the last couple rounds of preliminaries after Tippett dislocated his shoulder as he dove on the Dorito side.

"Our roster really had some good depth on it," Campbell said. "Chris Smith had to step up and take (Tippett's) spot and he did great."

Besides playing at home, Campbell said the Flames' athleticism gave them an advantage on their competition.

"We've had some pretty good workouts and that's definitely helped us out a lot, having a better edge over the other teams in endurance," he said.

Next Saturday, the Flames will travel with all five of their lines to a 20-team MSCC Class AA Event No. 2 in Kentucky.

"After this event, I think we're warmed up and ready to go for Kentucky," Davidson said. "It'll be a little less competitive, since it's Class AA, and I'm hoping to come in the top three or four with all of our lines. I think we could definitely take multiple spots on the podium, first, second, or third."