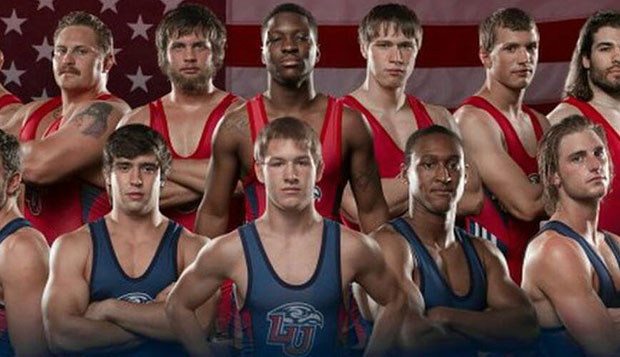 Liberty University's wrestling team sent five of its 14 competitors to either the championship or consolation finals in a 14-team Fall Brawl tournament on Saturday, hosted by Ursinus (Pa.) College.

Freshman Josh Llopez, seeded No. 1 at 174 pounds, claimed the Flames' only individual title, defeating American's second-seeded  Jeric Kasunic, 4-2 in the championship match. He recorded two falls on the way to the final, pinning Gettysburg's Brian Gianforte in 1:29 in the round of 16 and teammate Josh Ferenczy in 44 seconds in the semifinals after scoring a major decision over McDaniel's Bryce Pappas in the quarterfinals.

Senior Keyshaun Ward, seeded second at 184, scored two major decisions en route to his final before having to take an injury default in his match against top-seeded Jason Grimes, also from American, an NCAA Division I program. He defeated Delaware Valley's Alex Price, 15-5, in the round of 16 and Anthony Mancini from Franklin & Marshall, another NCAA DI school, 14-6 in the semifinals.

Sophomore Ryan Diehl, the defending champion at 133 pounds, conquered  two opponents from American to reach the 141-pound finals. He defeated Michael Spraque 3-1 in the quarterfinals and Tom Page by injury default in the semifinals before dropping a 3-1 overtime decision to second-seeded Cary Palmer from Hunter College in the final.

For the reigning NCWA national champion, it was Diehl's first loss at Liberty, after dropping an 8-7 decision to Princeton's Jordan Laster in an exhibition match at last Saturday's All-Star Classic in nearby Philadelpia.

Sophomore heavyweight Evan Canady placed fourth, pinning his first two opponents before losing by 11-0 major decision to Delaware Valley's Zachery Roseberry, who's ranked third in NCAA DIII, to get knocked to the consolation bracket. There, he won three decisions, 13-6 over Franklin & Marshall's Charles Kerkesner, 2-1 over Rochester Institute of Technology's Sam Weigner, and 4-2 over Gettysburg's Anthony Puca before suffering a first-period fall to Pat Schinder from the College of New Jersey in the third-place bout.

Sophomore 125-pounder Tim Nordan and graduate heavyweight Josh Pelletier ended up defaulting out of the tournament in the semifinal round of consolations, after each received a bye and won two matches. Pelletier lost his championship semifinal match by 3-2 decision to Roseberry and Nordan was pinned by Delaware Valley's Connor Kirkegard in the third period of his semifinal bout.