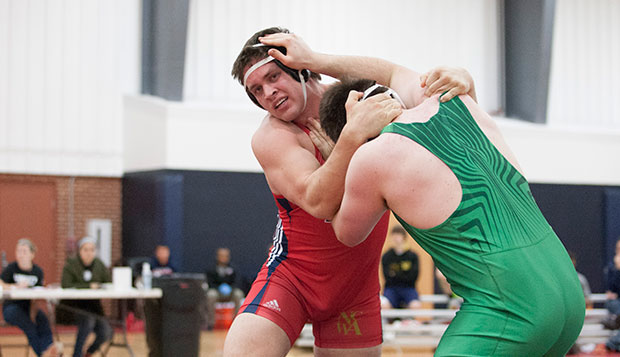 However, for the third time in four years, the Flames will have the opportunity to host the Mid-Atlantic Conference wrestling championships Feb. 27-28 at the LaHaye Multipurpose Center, formerly known as the Schilling Center. That will give them a decided home-mat edge as they contend for a fourth consecutive MAC tournament title since dropping down from the NCAA Division I level in 2010.

"It's huge," Liberty Head Coach Jesse Castro said of the event returning to Lynchburg. "Not only is it a cost-saver, but it's also home-field advantage wrestling in front of your home crowd."

The Flames were selected as the tournament site after last year's event held at East Tennessee State University (ETSU), which they won in decisive fashion with seven individual champions out of the 11 weight classes.

"Last year was our highest scoring tournament that we've had in the conference and the greatest discrepancy (70 points) between the first and second team (Middle Tennessee State)," Castro said after the Flames racked up 219 points. "That was the goal."

The top five place-winners in each weight class at the MAC tournament, plus five wildcards from across the country, qualify for nationals.

"Our conference has repeatedly done well at the national tournament," Castro said, noting other conferences only receive three or four automatic bids per weight class. "Our goal this year is to take 22 wrestlers (two in each weight class)."

He anticipates the MAC tournament site will rotate between the 14 conference members in future years, to be determined at the annual Mid-Atlantic Conference Coaches Association (MACCA) meeting.

"The association likes to alternate it," Castro said. "We're fairly centrally located, but western Tennessee schools would much prefer it be at ETSU. Next year, it will go back to somewhere more southern."

Before the conference and national tournaments, Liberty will seek to capture its second NCWA National Duals title in four years Jan. 23-24 in Dalton, Ga., after finishing runner-up in 2013 and third this past season.

On Sept. 27, the Flames will participate in a team-bonding experience when they endure their second "Jacob Challenge," a 24-hour marathon of wrestling and conditioning.