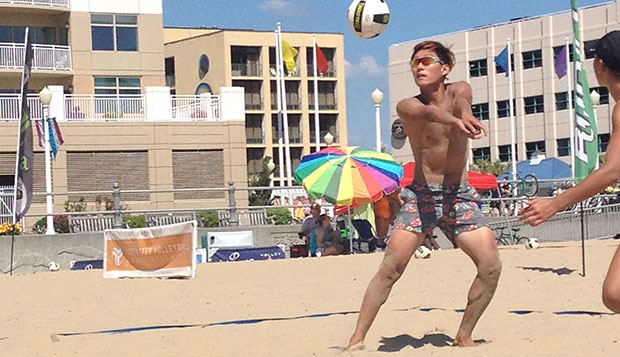 "I was especially proud of Steven Fawcett and Andrew Nelson, who had to play two playoffs matches that went three games," Liberty Head Coach Rachel Willis said. "They defeated Mike and Aaron in the first round and then fought hard in the semifinals against the Virginia Beach team of Shawn Yoder and Bobby Kendall, which won the tournament."

She said Fawcett and Nelson played with consistency, stringing together service runs when they needed them most against challenging opponents.

"They've grown the most as partners, and kept it together even when they were down to come back and win games," Willis said.

Also on Saturday, Matthews and Jones tied with Lady Flames teammates Horne and Johnson for seventh place in the women's division.

"This was our first time playing on Virginia Beach this season and it was an eye-opening experience for us to deal with wind coming off the ocean and to compete against men's and women's teams who play a different type of game than we are used to," Willis said.

Many of Liberty's opponents caught the Flames off guard by sending the ball over the net on the second touch, rather than using the typical bump, set, and spike sequence. The women's players also had to deal with a net that was a few inches higher than they were accustomed to.

"That kept a lot of them from swinging away because the higher net height took them out of their comfort zone," Willis said.

She was impressed with the progress made by Matthews and Jones, who was playing in her second tournament since suffering a high-ankle sprain early this spring.

"Kara Matthews and Morgan Jones look like they're back in business," Willis said. "They had been my top team going into our first tournament in April. The team didn't perform very well just two weeks ago at our last home tournament, but played incredibly well this weekend against seasoned Virginia Beach veterans."

She said most of the games they lost were only by two-point spreads.

"They were trying out a newer defensive system, and I'm confident they'll be able to win those match-ups when we return next month," Willis said.

Liberty will compete in a second men's and women's doubles tournament at Virginia Beach on July 12-13 before sending one men's and one women's tandem to the National Collegiate Sand Volleyball Association (NCSVA) Championships, July 24 in Long Beach, Calif.