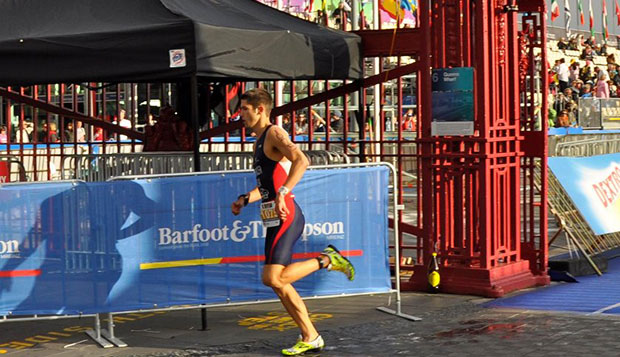 Former Liberty triathlete Parker Spencer, who was hired last week to coach the Flames, competes in the ITU World Championships in New Zealand in October, 2012.

Originally recruited as a middle distance runner on Liberty University's NCAA Division I track and field team, Parker Spencer — who was introduced on Friday as the Flames' new men's and women's triathlon head coach — added swimming and cycling to his running routine late in his collegiate career.

"I did a triathlon or two and realized that was something I was really becoming passionate about," said Spencer, who finished first in the 20-24 age group at the USA Triathlon Sprint National Championships in August of 2011 before hiring Endorphin Fitness (EF) founder Michael Harlow to serve as his personal trainer for his senior year at Liberty. "I moved to the triathlon program after my junior year and it was one of the best decisions I've ever made. It's a really up-and-coming sport and it's growing like crazy."

He expects to see Liberty's triathlon team progress toward unprecedented levels of success over the next few seasons using an individual training program he has introduced to up-and-coming youth and adult triathletes through his job as a coach and personal trainer at the EF facility in Richmond.

"What a lot of schools do is they make every single athlete on the team train with the same program," Spencer said. "Ours is going to be a lot more individualized, since each athlete has their own needs. It's going to be tailored to each individual."

He plans to set each of the Flames' returning triathletes up with a training program by the first week of July so they will be in racing shape for the start of the season and prepared to peak for the Mid-Atlantic Collegiate Triathlon Regional Championships, which Liberty will host for the first time in October.

"We're limiting the men's and women's team to 20 people this year because I want to make sure the quality of coaching is as ideal as possible," Spencer said. "I will do clinics and training camps and exercise performance testing several times a semester and the athletes will also receive daily feedback from me on their training plan. They can write feedbacks on their workout, and at the end of the day, I'll provide my own to see what we can adjust."

He foresees the program continuing to flourish in the future.

"Our goal to have athletes from all around the country coming to compete in the program and to make this the best program in the country," Spencer said, noting Liberty is an easy sell to potential triathletes because of the amazing training facilities at the LaHaye Student Union, LaHaye Ice Center, indoor and outdoor tracks, Liberty Mountain Trail System, and the school's proximity to the Blue Ridge Mountains, Smith Mountain Lake, and Ivy Lake. "There are few schools that have the facilities and the financial resources that we're going to have the opportunity to use."

"We are going to devote the resources needed to build a championship program," said Lee Beaumont, Liberty's senior vice president for auxiliary services, noting athletes will have access to athletic trainers and strength and conditioning coaches in the Club Sports training room and weight room, which opened last summer.

Spencer said Liberty's triathlon club is run like an NCAA program, allowing the athlete to excel beyond their own expectations.

Harlow, who is a Christian, started EF in 2005 as a youth program and has expanded it to serve collegiate athletes and adults.

"We see triathlon as a vehicle to influence lives, as a sport that opens a lot of doors for conversations," Spencer said. "We've had several athletes come to Christ through the program and knowing where we stand on a spiritual level."

Spencer is the son of Jay Spencer, dean of the Liberty University Online Academy, and also works as a Health & Physical Fitness teacher for LUOA.

EF has trained Richmond's Stone Dyson, now a senior at LUOA ranked among the top five junior triathletes in the country, since he was 10 years old. Dyson is considering joining the Flames' triathlon team upon receiving his high school diploma in December and enrolling at Liberty in the spring.

He is a budding professional triathlete himself. He placed second overall in the 2013 Virginia Triathlon Series behind only Harlow, who was named the USA Triathlon 2012 developmental coach of the year. After graduating with a Bachelor of Science degree in Exercise Science in the spring of 2012, Spencer, sponsored by Liberty, competed along with outgoing Head Coach Beth Frackleton and rising senior captain Joseph Anderson, who is also trained by EF coaches, at the International Triathlon Union (ITU) World Championships, Oct. 23, 2012, in Auckland, New Zealand.

"Triathlon originated in America, but really, places like Australia, Britain, and New Zealand have dominated on the international scene," Spencer said. "It's really cool to see the sport growing as much as it has recently in the United States, to see Americans becoming a force on the international level, too."

Spencer also raced in last year's ITU World Championships in London and will travel to Edmonton, Canada, for this year's event from Aug. 26 to Sept. 1.