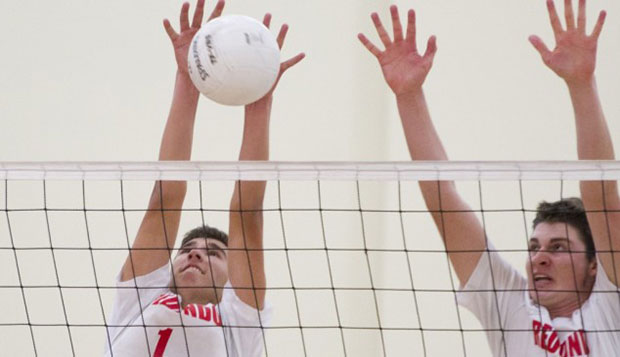 Setter Nick Williamson (1) served as captain for Redondo Beach High School as a senior, leading it to the state quarterfinals.

Growing up playing pickup games on the beaches of Southern California, Liberty University incoming sophomore men's volleyball transfer Nick Williamson shifted from the sand to the hardcourts in seventh grade.

"I've been playing on the beach since I could walk, so I've been around volleyball pretty much my entire life," said Williamson, who was introduced to the indoor game when Redondo Beach High School's coach visited his middle school.

Williamson, who played club volleyball against a number of future NCAA Division I recruits, started at setter and outside hitter as a sophomore at Redondo, utilizing a blend of the skills he picked up on sand.

"Playing beach volleyball gives you the overall skills you need to do anything on the court," Williamson said. "You have to be strong at everything — set, hit, and play defense. Transitioning to indoor is easier and you can pick it up faster because you have that all-around game."

Williamson served as captain as a junior and senior at Redondo, twice leading it to the state tournament. Last fall, he went on to play for Arizona's club team, ranked No. 1 in the nation in the first National Collegiate Volleyball Federation (NCVF) 2014 Division I poll, before leading El Camino (Calif.) College to its first Western State Conference title this past spring.

Liberty Head Coach Bryan Rigg said Williamson was looking for a private Christian school with a larger campus that had a volleyball program.

"He hadn't heard of Liberty until recently," Rigg said. "He didn't think such a place existed, but he found it."

He made a visit to Liberty two weeks ago and his transfer was accepted last week.

"I was definitely looking for a private Christian university were I could grow my faith as well as pursue my academic degree," said Williamson, who plans to study in the School of Business and major in economics. "Out of high school, I wasn't really sure what I was looking for. I think Liberty is a perfect fit for me."

As much progress as Ethan Chase made after moving from right-side hitter to setter last season, the Flames should be better off with him back at his natural position for his senior year this fall.

Chase will relinquish his setting responsibilities to Williamson, who will organize the offense, distributing to a powerful front line of hitters and blockers that features graduate student Kevin Snyder, sophomore Si Hershberger, incoming freshman Luke Werth, and seniors Joel Marselus and Chase.

"One of my strengths is knowing who to set at the right time," Williamson said. "Communication between hitters and the setter is key and I think I have great communication skills. I'm a leader on the court and I let my hitters know what's going on."

He expects his West Coast playing style to translate well to competition in the Eastern Intercollegiate Volleyball Association, where Liberty hopes to challenge defending champion Virginia Tech and runner-up James Madison University for the regular-season and tournament crowns.

"Transitioning to the East Coast, I want to do everything I can to help elevate Liberty to a higher level," said Williamson, who will spend the summer playing in the California Beach Volleyball Association before arriving in Lynchburg, Va., on Aug. 13. "I'm used to playing at a high level anyways and I've seen a lot of the top teams play (at Arizona), so I want to bring everything I know from playing out here to Liberty."