No. 24 Flames upset No. 21 Hokies to clinch top seed in SELC 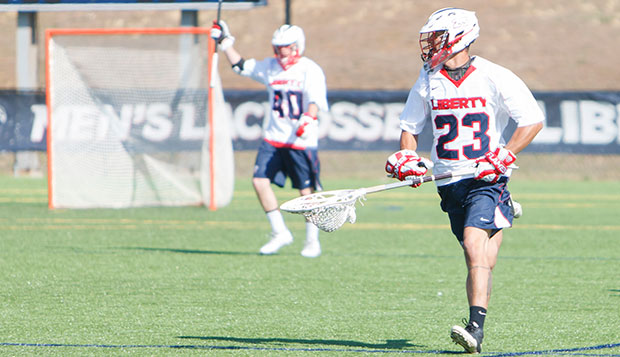 Junior goalie Ethan Kamholtz came out of the cage to make some critical saves and clears in the 10-8 triumph over Virginia Tech at the Liberty Lacrosse Fields.

The regular-season finale was one of the biggest victories in program history for the Flames (12-3, 5-0 Southeastern Lacrosse Conference Division I, Northwest Region), and their first over a team ranked in the MCLA Division I poll. Virginia Tech was No. 21 and Liberty No. 24 entering the contest, played before a sizeable Good Friday crowd.

"There are a lot of reasons for this being a big deal for us," Flames Head Coach Kyle McQuillan said. "This is the first time for us to play Virginia Tech, the No. 21-ranked team in the country which has dominated this part of the league for a long time. It was a good crowd, it was senior night. Everything was in our favor to come out and have a good game tonight and I'm glad the guys came away with a victory."

The win clinched the No. 1 seed out of the Northwest Region for Liberty in next weekend's single-elimination SELC DI Tournament in Atlanta, where the Flames will face Vanderbilt in Friday's first round at 8 p.m. The Hokies (11-3, 4-1), who rallied from a 10-5 deficit with 10 minutes remaining in regulation before being held scoreless for the final 3:37, will be one of four No. 2 seeds and meet Southwest Region champion Georgia Tech in the first round.

"It's a big thing being able to defend our home turf, especially in front of a crowd like we had here tonight," Liberty graduate student and long-stick midfielder Michael Zumpano said after the Flames won their seventh home game of the year and 12th in a row dating back to the 2012 season. "This is a team we've been looking to measure up to, so knowing we can come out and compete and get a victory against them is a big confidence boost for us and a big win for our program."

"From here on out, it's win or go home," he added. "We're just going to keep pushing. Right now, we're just focused on winning an SELC championship and we'll let the rankings take care of themselves."

Miller, who led all scorers with four goals to bring his SELC DI-leading point total to 63 for the season, circled the cage before firing a left-handed shot from out front into the upper netting, tying the score at 3-3 with 1:03 left in the first. After Liberty junior goalie Ethan Kamholtz picked up a loose ball and averted a few Hokie attackmen on the way to midfield, Bernardo (three goals) came off the right endline and ripped a shot inside the left post from a tough angle, knotting the score at 4-4. Then, 2:43 into the second half, Tobias came out from behind the right side of the cage and scored on a leaping turn-around shot that bounced past Virginia Tech goalie Charlie Blakeley.

Tobias' second score — assisted by sophomore Charles Fianko who won the faceoff and started the fast break — broke a 5-5 tie and put the Flames on top to stay just five seconds after the Hokies had scored the equalizer.

Kamholtz made 11 saves, coming out from the cage to clear the ball on a few occasions after making a stop or interception.

"Ethan, you don't see on the stat sheet the amount of times he comes out of the net and creates a turnover," McQuillan said. "He's a phenomenal player."

Miller capped the third-quarter scoring with a sidearm shot from the left side after receiving freshman midfielder Chad Moore's assist from behind the right side of the cage. With the Flames running a four-corner, slow-down offense, Bernardo caught Tech off guard with a shot from inside a crowd of defenders for a seemingly insurmountable 10-5 lead.

However, Virginia Tech rallied for three goals in a span of four minutes midway through the fourth quarter.

"We were doing our best to protect the lead," McQuillan said. "They started being very aggressive. They started coming out and taking some risks. They did a very good job of making us earn this one tonight."

Virginia Tech had the numbers on Liberty, with a 51-man roster compared to 30 for the Flames, who made the most of their possessions and finished well.

"They definitely had a huge bench and we knew that coming in," Zumpano said. "It was going to be about us working hard, but ultimately, you can only have 10 guys on the field at a time, so we knew if our 10 was better than their 10, we'd give ourselves a chance. We just executed enough to take care of business tonight."