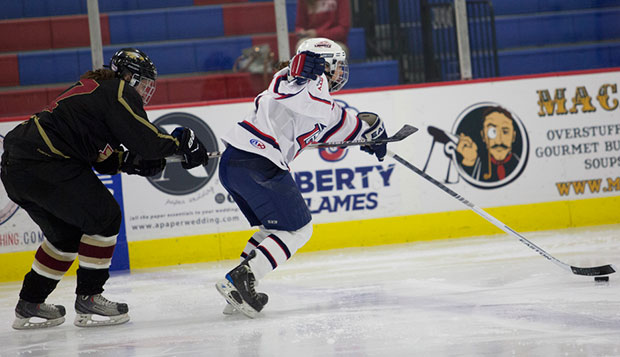 The Lady Flames split two games with the Eagles, Oct. 19-20 at the LaHaye Ice Center and took them to overtime for the third time in the last four meetings Thursday night in Delaware.

With its back against the wall in the second game of the ACHA Division I National Championships, Liberty University's DI women's hockey team rallied for two goals in the final 4 minutes, 14 seconds of regulation to forge a 4-4 tie with Robert Morris Illinois, Thursday night at the Gold Ice Arena in Newark, Del.

Liberty senior defenseman and captain Courtney Fischer started a fast break with an outlet pass to sophomore forward Carrie Jickling and received a return pass before putting a backhanded finish past Eagles freshman goalie Amy Murray from in the left crease. That gave the Lady Flames, who lost to the University of Massachusetts 2-1 in Thursday's morning opener, new life and renewed energy. They got an extra charge when RM senior forward Becky Geertz was called for her second penalty in the final four minutes, putting Liberty on the power play for the remainder of regulation.

As he did for the final two minutes against UMass, Liberty Head Coach Paul Bloomfield pulled his goalie — in this case sophomore Kristina Toppazzini — for the final two minutes, giving the Lady Flames a six-on-four advantage. Freshman forward Marissa Graham nearly converted the equalizer off a pass from behind the cage, but her shot was blocked by Murray. Finally, with 43.6 seconds to go, sophomore forward Catharine Burrell snuck a shot in from the right endline off an assist from junior forward Sarah Stevenson, tying it at 4-4 and forcing a five-minute overtime.

Toppazzini saved a point-blank shot from in front of the cage for one of the few threats in the extra period and both teams went to 0-1-1 in the tournament, needing a win in Friday's third and final pool-play contest to have a chance to advance to Saturday's semifinals.

Liberty will face Adrian College, a team that shut it out 1-0 Oct. 3 in Michigan, at 1:15 p.m., with its season on the line. Adrian edged RM 3-2 in overtime in Thursday's early game before losing to UMass by the same 2-1 count as the Lady Flames, meaning the Minutewomen have clinched one of the two Final Four bids.

Just three and a half minutes into the action on Thursday night, Eagles senior defenseman Marianne McLaughlin's shot from the high point slipped past Toppazzini for a 1-0 lead. RM sophomore forward Chelsea Kasprick pushed it to 2-0 with a wrist shot from in the right circle at the 11:04 mark.

Less than 20 seconds later, the Lady Flames got on the scoreboard when junior forward Amanda Grainger received a pass deep in the crease and slid it under the pads of Murray.

In the second period, Liberty killed a five-on-three power play opportunity for RM, with Toppazzini dropping and rolling to make a save near the left post. But Eagles senior forward Hayley Williams scored twice in the final 3:45, sandwiching an unassisted goal by Jickling, to boost the lead to 4-2.

Williams, the ACHA DI regular-season scoring leader in the with 32 goals and 38 assists, received a pass from senior forward Ramey Weaver, who ranked second in the league with 32 goals and 21 assists on the year, and chipped it over Toppazzini on transition. Jickling, who scored the game-winning goal against RM in double overtime in last year's ACHA National semifinals, made it a one-goal game with her shot from the right wing 1:20 later. But Williams struck again, scoring unassisted with 1:09 left by sliding the puck past Toppazzini as she crashed to the ice on a breakaway, giving the Eagles a two-goal cushion heading into the third.