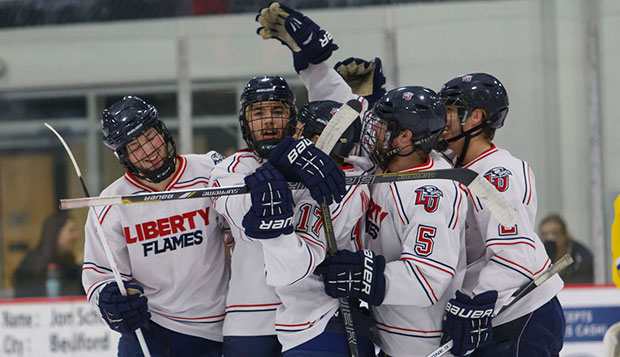 Two goals directly off faceoffs with six minutes left in the first period and six minutes into the second propelled Liberty University's fourth-seeded ACHA Division II men's hockey team to a 2-0 lead en route to a 4-1 win over No. 9 Delaware University in the first round of the Southeast Region playoffs, Saturday night at the LaHaye Ice Center.

Because No. 3 Penn State rallied for two goals in the third period of a 2-1 triumph to keep No. 10 Bowling Green from staging an upset late Saturday night, Liberty will meet No. 5 Miami (Ohio) University for the first time in Sunday's second round, starting at 11:15 a.m., with a berth in the ACHA DII National Championships on the line.

The Flames (24-7-1) swept all four meetings with the Blue Hens (19-12-1) this season, with the third a 7-1 rout in the first round of last weekend's Mid-Atlantic Collegiate Hockey playoffs in Abingdon, Md.

"It was a much different game this week," Liberty assistant coach Mike Morrison said. "Delaware kind of caught us on our heels at the start of the second. They came out firing. They had nothing really to lose. We had everything to lose. They came out hard, they played a good system and we just happened to get a couple bounces."

"Lynott, Miller, and Freymond just had an excellent game tonight," Morrison said. "They came out strong, they played hard, and they just came in clutch when we needed them the most. They're definitely a young line, but tonight they just brought the energy for the team. They were just on fire tonight and the guys really fed off that on the bench."

Freymond assisted Miller on the first goal with 5:55 left in the first.period by winning the faceoff in the left circle, where Miller fired the puck through traffic for a 1-0 lead.

"We had a great faceoff draw, a play that we ran, and the fourth line finished on that one so they did a great job," Morrison said.

Later, on a near-identical play with 14:02 to play in the second, junior forward Johnny Cotton won a faceoff back to senior forward Bobby Cervone who's quick shot from the top of the left circle sneaked past Delaware senior goalie Joe Marshall.

Delaware got one goal back early in the third when sophomore forward Mike Stickle cleaned up a loose puck in the left crease, lifting it past Liberty junior goalie Cary Byron.

Byron, who made three saves early in the period, sprawled like a catcher blocking a pitch in the dirt to stop a potentially game-tying shot by senior defenseman Matthew Kirincic midway through the third. That opened the gates for the Flames to break the game wide open with two goals in the final five minutes.

Junior defenseman Clinton Nigh poked the puck away for a steal in Delaware's defensive zone before Freymond followed Nigh's backhanded shot blocked by Marshall by lifting a backhanded rebound top shelf for a 3-1 lead. Two and a half minutes later, Lynott received a cross-ice pass from Miller on transition and ripped a right-handed wrist shot from the left wing past Marshall under the crossbar, sealing the victory.

"He's right handed and he had a great angle on it and found the back of the net," Morrison said.