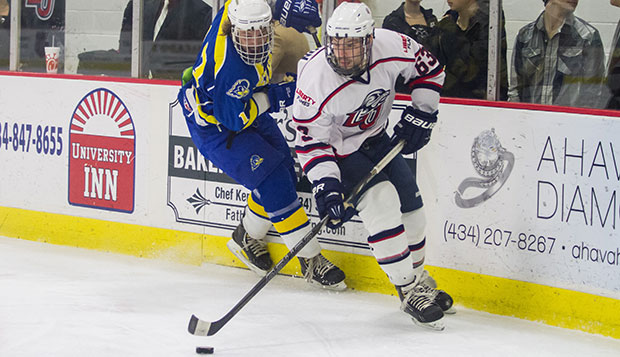 Liberty sophomore forward Bram Erickson works the puck along the boards in the Flames' sweep of the Blue Hens, Nov. 8-9 at the LaHaye Ice Center.

Liberty University's ACHA Division I men's hockey team took Delaware to a shootout for the second straight time this season, Friday night at Fred Rust Arena in Newark, Del. However, the Flames were snuffed in penalty shots for the first time in three tries, 3-2.

After suffering back-to-back losses for the first time this season last weekend against No. 1 Arizona State University, Friday night's setback extended the third-ranked Flames' losing streak to three games. Meanwhile, the No. 9 Blue Hens snapped a two-game skid after being swept at home by Stony Brook.

Liberty (23-6-2) was ranked seventh and the Blue Hens (21-7-3) fourth the last time they met, Nov. 9 at the LaHaye Ice Center. In that game, the Flames tied the contest in the final 56 seconds of regulation on junior forward Lindsay LeBlanc's second goal of the game before prevailing in a shootout, 4-3. This time, the roles were reversed as Delaware netted the equalizer with 36.8 seconds remaining on an unassisted goal off a faceoff by sophomore defenseman Alex Guerere. The Blue Hens then won in the sixth round of penalty shots on a top-shelf score by senior forward Michael Piet, who beat senior goalie Blair Bennett with a shot that clanged off the back center post.

"Blair played an excellent game for us," Liberty Head Coach Kirk Handy said of Bennett, who made 34 saves. "He made the saves he needed to make. Both of their goals (in regulation) didn't go directly past him, but were deflected in."

Delaware struck first on a power play midway through the first period when sophomore forward Leo Skehan redirected senior defenseman Kevin Redmond's shot from the right circle with his stick. The goal was assisted by senior forward Mark Zeszut, who ranks fourth in the ACHA in scoring.

"In the first period, we didn't play all that well, so (on Saturday), we want to be making sure we come out and have the effort we had in the second and the third tonight," Handy said. "We want to be better in our own zone."

Five minutes into the second period, Liberty tied it up with a power-play goal of its own by senior defenseman Jackson Kuhn assisted by LeBlanc and senior forward Andrew McCombe.

Then in the third, Flames freshman forward Robert Ward intercepted a pass near mid-ice and started a breakaway, which he finished with a beautiful unassisted shot into the top right corner past Blue Hens freshman goalie Dylan Troiano.

Troiano saved Ward's wrist shot with just under six minutes to play before Guerere tied it back up at 2-2, forcing the scoreless overtime.

"We had opportunities to bury a few more shots and weren't able to connect," Handy said. "That's what we need to focus on doing (Saturday). We had a chance to go up 3-1 and couldn't capitalize. There were critical points in the game where we have to bear down and put teams away in those situations."

LeBlanc netted the first goal in the shootout by deking Troiano to the left and tucking a backhanded shot into the upper netting. Delaware junior forward Marcello DeAngelis tied it back up by threading a shot through the five-hole before Liberty junior forward responded by ripping the puck between Troiano's legs after drawing him out of the cage. The Blue Hens' final two shootout scores, by Redmond and Piet, were both wrist shots lifted over Bennett into the top shelf.

After allowing the first-period power-play goal, the Flames showed restraint and generated their share of scoring opportunities, outshooting the Blue Hens 41-36 for the game.

"I thought we did an excellent job of staying out of the box," Handy said. "Our team discipline was excellent as far as penalties are concerned. We had our fair chances to win that game. It was one of those games that, moving forward, we have to win."

Liberty, which lost three of four contests against Delaware last year, will try to win three of four this season when the two teams conclude their series on Saturday. The puck drops at 3:40 p.m. and the action will be webcast live from Rust Arena.