Flames debut at No. 8 in SELC Division I preseason poll 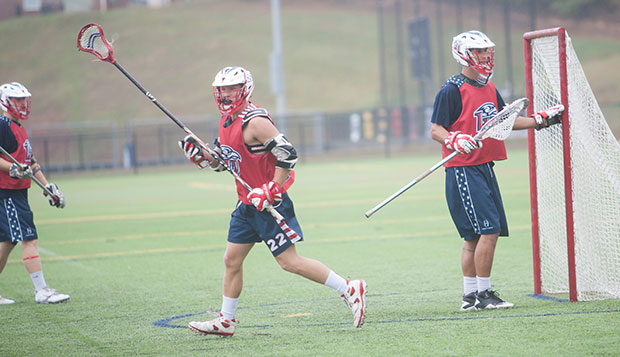 Liberty University's men's lacrosse team, moving from Division I to II of the Men's Collegiate Lacrosse Association (MCLA), debuts at No. 8 out of 22 programs in the SouthEastern Lacrosse Conference preseason poll released this week.

Flames Head Coach Kyle McQuillan thought his team might have been ranked a bit higher coming off a season in which it advanced to the MCLA DII National Championship semifinals, but realizes the transition to Division I is going to be a challenge.

"I'm always going to think we're better than other people think we are," he said. "But we're in a good spot, since the top eight teams go to the (MCLA DI) playoffs. If we're in a position where people are underestimating us, it's a position we're very comfortable being in — being the underdog."

"We are kind of rebuilding in a new division, but we don't have to start at rock bottom," McQuillan said. "We've already got a foundation and a large group of players back from last season."

He wants his team to use the poll as motivation to rise up the rankings.

"I tell these guys, my expectation is that we'll win an SELC championship in our first season at Division I," McQuillan said. "I'm hoping they look at that as some fuel for this season and the success, hopefully, we're going to have. We're pretty realistic in what we want to accomplish and the guys are on the same page."

The Flames open their 15-game season with two of their seven contests at the Liberty Lacrosse Field — against Wake Forest on Feb. 21 and New Hampshire on Feb. 23. Their next home date is a midnight showdown with 10th-ranked North Carolina State on March 28 before hosting No. 9 Auburn on March 30.

One of the games the Flames have circled on their calendar is the regular-season finale against the Hokies, who are projected to finish first in the Northwest Region, just ahead of Liberty.

"We're excited about the midnight game, but Virginia Tech is definitely the most important game on our schedule," McQuillan said. "That's a regional game against a team that's been a powerhouse in the SELC for a number of years. It's our chance to earn the respect that I feel we deserve."

Besides bringing in a class of eight freshmen, including long-stick defenseman Nate Whyte, and Chad Moore, a midfielder from NCAA Division I Mercer University, Liberty has added another NCAA DI transfer, sophomore midfielder Brett Bernardo from Marist College (N.Y.), to strengthen an already deep midfield.

"Overall, we're stronger and have a lot of depth at all positions," McQuillan said. "People are definitely going to be surprised because we're going to have not just one or two, but a handful of midfield lines that are going to be dangerous."