No. 10 Lady Flames snuff No. 2-ranked Rhode Island on road 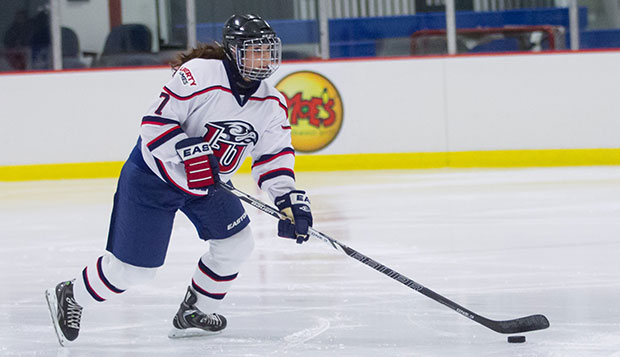 Debuting at No. 10 in the season's first ACHA rankings released Thursday, Liberty University's Division I women's hockey team staged a major upset Friday night at No. 2 Rhode Island, winning by a 4-0 count.

Junior forward Amanda Grainger scored Liberty's first goal just four minutes after the opening faceoff, deflecting in a shot taken from near the blue line by junior forward Jenny MacArthur, who was set up by the first of three assists from senior forward Nikki McCombe.

"It was just a puck along the boards in the offensive zone and Nikki chipped it out to Jenny, who took a little wrist shot from the point and Amanda deflected it in with her body," Forth said.

Both teams remained scoreless for the next 42 minutes before freshman defenseman Marissa Graham doubled Liberty's lead to 2-0 six minutes into the third period off assists from Grainger and McCombe.

"Nikki McCombe cycled it down in the corner to Grainger and she made a jam play at the net and Marissa was there to put it in," Forth said.

"It was just a clean breakout on an odd-man rush," Forth said. "It was a 2-on-1 and Carrie just kept the puck and picked the top right corner."

Senior defenseman Courtney Fischer capped the scoring with a shot from the point off McCombe's third assist.

"Nikki worked it back to the point and the other girls did a good job of screening the goalie and (Fischer) took a wrist shot that got past the goalie with about six minutes to go," Forth said.

The Lady Flames outshot Rhode Island 30-25 for the game with Lischynski posting her second shutout of the season.

"Chantal played great," Forth said. "She battled hard, made some really great saves and she tracked the puck well tonight."

The two teams will play again Saturday afternoon at 2 p.m. before the Lady Flames travel to No. 5 UMass for games on Monday and Tuesday nights.