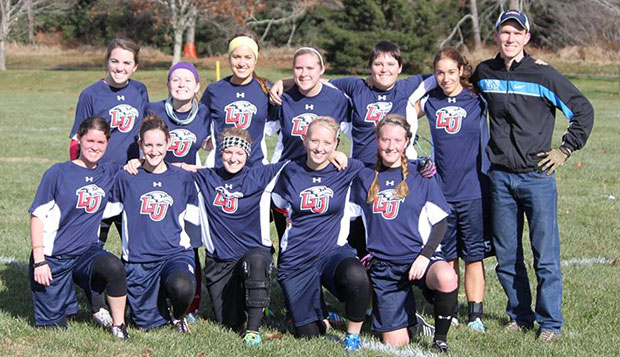 Playing in its first tournament of the season, Liberty University's women's Ultimate Frisbee team placed 12th out of 16 teams over the weekend at the Blue Ridge Blowout, hosted by Appalachian State University in Boone, N.C.

The Lady Flames finished 1-5, avenging one of two overtime losses on Saturday with a 12-3 triumph over the College of Charleston in Sunday's rematch.

Jonathan Mast, who helped start up Liberty's program in 2010 and played for the men's team before graduating in 2012, serves as head coach of the women's team and an assistant to Jason Jarrett on the men's squad.

"He and I pretty much tag-team coach and work together to recruit teams," Mast said, noting that is still very much a work in progress. "We have three returners from last year. All of the rest of the players are new, including many who have never played ultimate before.

"Considering that, we did quite well for our first tournament as a team," he added. "They are having to learn things on the fly and their effort, grit, and teachability was inspiring."

Liberty was without senior Stacy Gardner, its only four-year player who couldn't make the trip, and the Lady Flames had just 11 of its 15 players available for seven-on-seven tournament play.

"Everybody played a ton of points, just because we lacked two full lines," Mast said, noting Anna Vanover played in 91 of the 95 points over the six games. "She only came off the field four times the entire tournament because we were so shorthanded."

Krista Johnson, a senior first-year player, threw the most points for Liberty, averaging close to five assists per game, followed closely by Vanover.

"Anna and Krista really stepped up to the plate," Mast said. "(Junior) Lindsay Matson, our go-to deep threat, was our leading scorer and every single person scored. The girls made lots of layout catches with endless cutting and hard defense."

Games are 75 minutes in length or the first team to reach 13 points.

After scoring the first three points of its opener against Elon University only to lose to the Phoenix by a 13-5 count, the Lady Flames fell to Virginia Tech 11-5 in Saturday's second match. They then dropped two matches in OT, with play extended to 90 minutes, losing two three-goal leads in a 9-7 setback to Charleston before giving up a universal sudden-death point in a 10-9 defeat against the University of North Carolina.

Mast said one of the highlights of the weekend was when sophomore Keziah Lewellyn caught the first "Callahan" goal in women's ultimate history at Liberty early on in the rematch with Charleston.

"We were playing in a zone defense and caught them in a trap on the sideline with three players," Mast said. "They tried to play it back and the wind caught it and Becca Staats deflected it and Keziah intercepted it in the (Cougars') end zone."

The point extended the Lady Flames' lead to 4-1 en route to the lopsided victory.

"Callahan goals are really demoralizing," he said. "It was a big momentum swing."

After the breakthrough victory over the Cougars, the Lady Flames concluded the tournament by falling to UNC Asheville, 6-3, in extremely windy conditions.

While the men's team hosts an eight-team tournament this Saturday and Sunday on Liberty's intramural fields, the women's team will scrimmage a team from Roanoke on Saturday before starting up its spring season with a tournament in January.