Liberty lands one champion, places three others at Fall Brawl 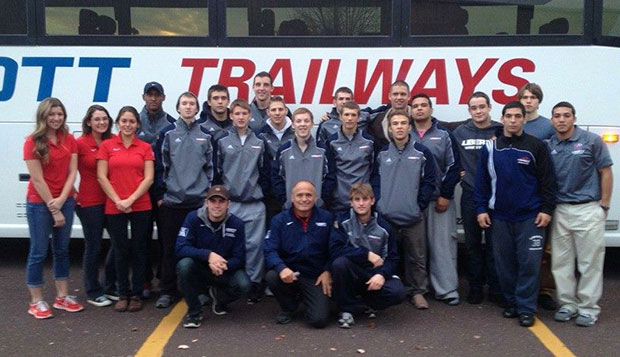 The 19 members of the wrestling team and their coaches and managers who traveled to Ursinus College for Saturday's Fall Brawl pose outside of their bus near Philadelphia.

Four Liberty University wrestlers placed in the 15-team Fall Brawl tournament hosted by Ursinus College outside of Philadelphia on Saturday, with one champion, two runners-up, and one third-place finisher.

Freshman Ryan Diehl, a state champion in high school last year, went 4-0 to capture the Flames' only individual title at 133 pounds. He defeated back-to-back wrestlers from Franklin & Marshall, the only NCAA Division I team in the tournament, in the semifinal and championship matches.

Diehl recorded a takedown in overtime to edge top-seeded Robert Ruiz, 5-3, in the semifinals before a scoring a 10-2 major decision of Diplomats teammate Scott Stevens in the final.

"He is a very good freshman out of Pennsylvania," Liberty Head coach Jesse Castro said. "To come in and win a college tournament on his first try was something else."

At 125 pounds, another freshman, Tim Nordan, won his first three collegiate matches for the Flames before dropping an 8-4 decision in the final to Ursinus' Christian Donaldson, an All-American last year who finished fifth in the NCAA Division III tournament.

At 157 pounds, Liberty junior Chase Boontjer took the roundabout way to a third-place finish, going 5-1 on the day. He won his first two matches before coming up on the short end of a 5-2 decision to Franklin & Marshall's Andrew Murano, the No. 2 seed, in the quarterfinals.

Junior 174-pounder Keyshaun Ward also placed second for Liberty after cruising through his first three matches to take the direct route into the finals. Ward, another NCWA All-American last year, scored a narrow win over a wrestler from Ursinus in the semifinals before losing by a 7-3 count to Robert Mamur from Navy Prep in the final.

"I was pretty impressed with the Naval Prep team," Castro said. "They'll probably be ranked in the top 10 in the NCWA as they had three finalists, too. All in all, the three club programs had a pretty good showing."

Also for the Flames, freshman 165-pounder Josh Ferenczy, who claimed a championship at last weekend's Virginia Beach Nationals, finished 4-2. All of the 19 wrestlers Liberty brought won at least one match.

"This was the second year we've gone to this tournament and we were one of just three NCWA teams," Castro said. "Overall, we gave our young kids an opportunity to compete and see what it's like at this level and they did a good job."