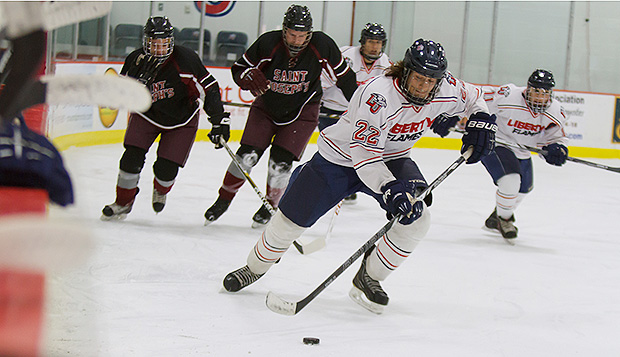 Liberty sophomore forward Jeff Boschman skates the puck away from the boards during Saturday's game against St. Joseph's, a 6-2 victory at the LaHaye Ice Center.

The first ACHA Division II Southeast Region rankings were released this week and Liberty University's DII team debuts at No. 3 in the extremely competitive region.

"I think it's the highest we've ever been ranked, so that's good," Flames Head Coach Chris Lowes said, noting they've been ranked as high as No. 4, most recently before last year's Southeast Region tournament. "I like our team. We're pretty balanced, with a lot of depth at forward, a lot of scoring punch. Our goaltending has been strong and our defense has been very much improved."

Liberty (13-3) suffered its only losses this season against the two teams ranked above it — No. 1 Florida Gulf Coast University, which swept the Flames Oct. 25 and 26 in Fort Myers, Fla., and No. 2 Virginia Tech (12-1), which beat Liberty 5-3 at the Roanoke Civic Center on Oct. 18 before the Flames won by the same score the next night at the LaHaye Ice Center.

"We're excited to play (FGCU) on our home ice (Jan. 17-18)," Lowes said. "We split with Virginia Tech, and were disappointed we couldn't have taken both of those because we don't play Tech again until the (Mid-Atlantic Collegiate Hockey) playoffs, potentially. It's a long season. Both teams have a lot of chances to win big games, or be upset by a lower-seeded team."

"I don't think we've ever had an autobid," Lowes said, noting in 2006, Liberty's last season before adding DI and DIII teams, it reached the ACHA DII championship game after being seeded fourth at regionals and staging a second-round upset. "We're in a good spot. Depending on our results, we could go down or we could jump up (into the top two.)"

The Flames lost in the second round of regionals the past three seasons, falling one game short of a national berth. Their offensive lines got a boost with the addition of Rick Turner, who joined the team last week after playing three years on the DI team.

"The ultimate goal is obviously nationals," Turner said. "They've been close the last couple years. Why not get there this year?"

Liberty will embark on its final road trip of the season this weekend when it travels to play No. 10-ranked Maryland on Friday, No. 6 University of Maryland Baltimore County on Saturday, and No. 14 Delaware on Sunday.

"Those are three league games and all three play really well at home, so it's our biggest road trip of the year," Lowes said. "It's a mighty task to go on the road and play three games against three ranked teams."

Liberty will play its last 14 regular-season games at home before traveling to Maryland for the MACH Playoffs in mid-February.

"We've got a lot of big games," Lowes said. "Everyone ranked behind us is going to be gunning for us."