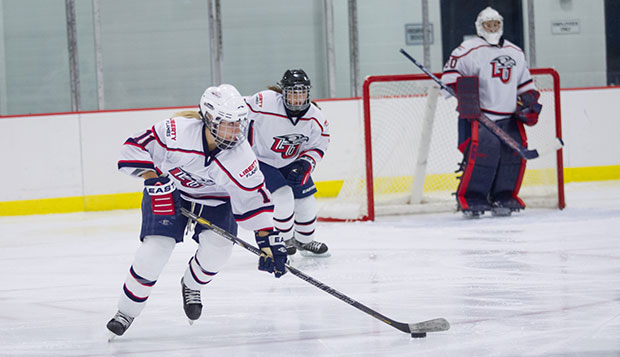 Two penalties by Liberty University's ACHA Division I women's hockey team in the final two and a half minutes of regulation allowed host Northeastern University to erase a two-goal deficit and salvage a 3-3 tie with the Lady Flames, Friday night at historic Matthews Arena in downtown Boston.

Liberty sophomore defenseman Brittany Hymers scored her first two goals of the season and junior forward Sarah Stevenson gathered a hat trick of secondary assists to lift the Lady Flames to a 3-1 lead.

"It was disappointing because we really did outplay them," Liberty head coach Paul Bloomfield said of the 2012 ACHA DI national champion Huskies. "They're not quite as strong as they were two years ago, but they're coming back. We had four girls out with injuries, but the girls we had playing played really, really well. Penalties just killed us. We had four penalties in the second period and even though they didn't score on those penalties, we lost opportunities to score, battling four-on-five."

The Lady Flames were without senior defenseman Courtney Fischer, freshman forward Courtney Gilmour, and sophomore forward Catherine Burrell, all nursing injuries, as well as senior forward Laura Del Monte, who flew to Boston to join the team on Saturday.

"Even with 13 girls, we outplayed them," Bloomfield said.

The Huskies drew within 3-2 on a five-on-three power play with 46 seconds remaining before netting the equalizer on a five-on-four with 21 seconds to go in the third. Neither team managed to put a shot on goal in a scoreless five-minute overtime period.

"We were just battling," Bloomfield said, noting the Lady Flames were called for seven penalties to just three for Northeastern. "We dominated even into the overtime period, but we just never were able to get it done."

"There was a little bit of a melee in front of our net and they called Stephanie with a cross check as the girl was fighting back before Autumn got a two-minute penalty for interference," Bloomfield said.

Junior goalie Chantal Lischynski made 22 saves for the Lady Flames, who outshot Northeastern, 31-25.

Built in 1910, Northeastern's Matthews Arena is the oldest multi-use venue in the world, formerly housing the Boston Bruins and New England Whalers.

"The Boston Celtics actually played in it the first three years," Bloomfield said. "It's one of the oldest original facilities in Boston, so it was neat to play in a rink that has that kind of history."

The Lady Flames will bypass downtown Boston and the traffic caused by Saturday's parade honoring the World Series champion Red Sox before returning to Matthews Arena for Sunday's 9 a.m. rematch with the Huskies.