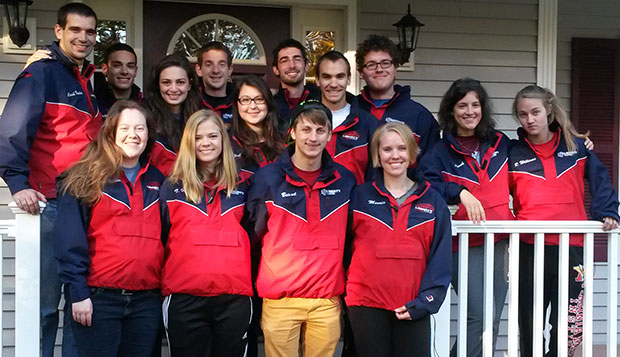 Members of the men's and women's varsity 4 boats sport their new jackets during the weekend trip to Boston.

A tight 180-degree turn late in Saturday's 49th running of the Head of the Charles Regatta in Boston, combined with choppy water conditions, caused Liberty University's women's varsity 4 boat to collide with the oars of another trying to pass it.

"Our boat was rowing well, at 30 strokes per minute," Liberty first-year head coach Sarah Morris said Sunday, as the team drove through New Jersey on the way back to Lynchburg. "But with a little more than 500 meters to go, right at the end of the 4,800-meter race, there's a 180-degree turn before going under the Elliott Bridge. We were one of two boats making the turn, and the other one turned in the wrong spot and our oars collided and our women's boat had to kind of yield to them and stop. No one was penalized. It was just bad timing on the turn in the rough water and we got tangled up."

The Lady Flames never quite recovered and finished 39th out of 47 boats in 21 minutes, 5 seconds in the race that featured a staggered start with one boat at a time released at 15-second intervals.

Morris said the Head of the Charles is not only the largest regatta in the United States, attracting boats from as far away as Germany and Romania competing in all age groups and divisions, but also one of the most challenging due to the lay of the river that runs right beside downtown Boston.

"It's one of the toughest courses to navigate because there are constant turns to the port and starboard sides and it ends with that 180-degree turn," Morris said. "There are six bridges they have to go under so it keeps (rowers and coxswains) busy, turning the corner and still having to go through the bridge."

Later in the afternoon, Liberty's men's varsity 4 rowed through even rougher waters as the winds picked up. The Flames struggled to a 36th-place showing out of 40 boats in 19:11.

"The men raced against a lot tougher competition," Morris said, noting their race was won by a boat from the University of Virginia. "We did OK, but not as good as I had hoped. It was a little rough, but it was definitely a fun trip and there was a lot was going on. It was a big race and the team still really enjoyed the experience overall of racing and being there."

Liberty will next gear up for the Head of the Occoquan, Nov. 2 at Sandy Park Run, Va., and the Head of the South, Nov. 9 near Augusta, Ga., on the same lake used in the 1996 Olympic Summer Games.

Crew at Head of the South