Flames' upgrade to MCLA Division I approved for this spring 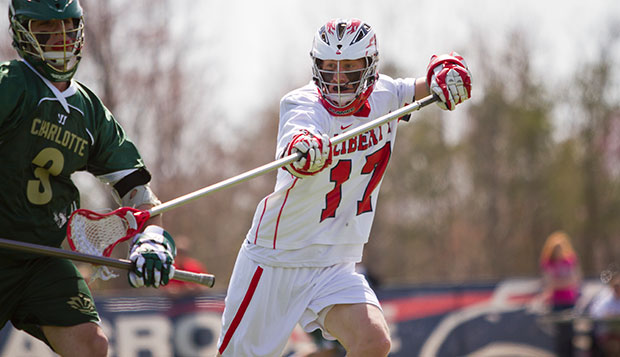 Liberty long-stick middie Michael Zumpano, who will return for a final season of eligibility as a graduate student this spring, is one of six players who have been with the program since it was revived in 2010.

At this past weekend's annual Men's Collegiate Lacrosse Association meeting in Atlanta, Liberty University's transition from MCLA Division II to Division I was unanimously accepted in voting by the SouthEastern Lacrosse Conference.

"There are 22 teams in Division I of the SELC and they all get a vote," Flames head coach Kyle McQuillan said. "It's a very big move for our program. We're definitely ready and we don't feel intimidated about it."

Liberty will take the place of Richmond, which is moving up to NCAA Division I, in the Northwest Region of Division I.

"With Richmond leaving, and us moving in, it was kind of good timing and made things easier," McQuillan said.

Long-stick middie Michael Zumpano, a first-year graduate student now working in the Club Sports office, is one of six returning players who was on the team in 2010, when the program was revived. Kurt Tobias, Derek Haywood, Miguel Lozada, Skyler Sipe, and Travis Briggs are the others.

"Those guys have been there since Day 1 and we've all worked really hard to get to this point," Zumpano said. "Even from the beginning, Kyle realized our school was a better fit for Division I. Last year, we were ranked third in the nation at the end of the season (at DII), so we were pretty excited about that. That's a testament to the hard work we've been able to put in. God has blessed us and we've tried to honor Him. That's been the reason for the success we've had over the past four years."

The Flames will travel to Michigan to face Davenport, which ended last season as the 21st-ranked team in MCLA DI, on March 21 and Michigan State, which was ranked eighth, on March 22.

"We're trying to make a name for ourselves in the SELC and the MCLA, so we're doing quite a bit of traveling this year," McQuillan said. "Our priority is to win another SELC championship, only at the Division I level, and to do our best in our own back yard."

"We're excited to get our feet wet in the conference and play teams from all over the Southeast," Zumpano added.

In late March and early April, the Flames will host N.C. State, Auburn, and West Virginia before concluding their regular season with SELC Northwest Region showdowns against GW on April 12 and Virginia Tech on April 18 at the Liberty Lacrosse Field.

"Our guys are excited to play a lot of really big-named teams this year from large universities," Zumpano said. "Football-wise, our university wants to move up to the FBS level and for us to be able to play a lot of those teams is going to be a big move for us as players and for our program."

The SELC DI and DII tournaments will start April 25 in Atlanta, a central location for the 40 total teams in the conference. The MCLA National Championships will take place next May in Orange County, Calif., hosted by the University of California Irvine and Chapman University.

"Ultimately, getting a bid to nationals would be a great way to complete our senior season for the core of us who have been together for four years," Zumpano said.

He said a number of teams in SELC DI are working to follow Richmond's lead to compete at the NCAA DI level and the MCLA supports that progression.

"The cool part about it is the MCLA does a really good job of fostering a governing body that caters to a high level of competition," Zumpano said. "They do it for big schools all around the country so we're excited to be a part of that big group of schools."