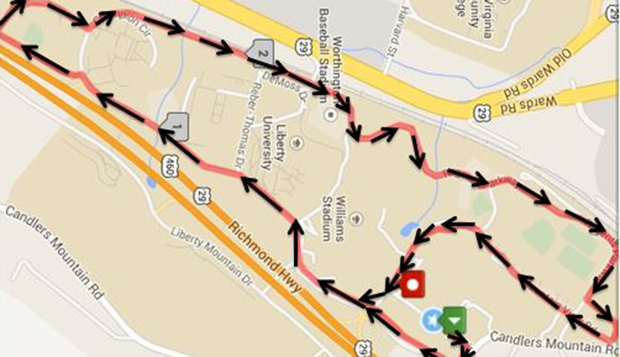 This is the map of the 11.5-mile cycling stage for the Sept. 21 sprint triathlon, with participants completing three laps around the campus loop.

Triathlon is one of the fastest growing sports in the world and Liberty University seeks to capitalize on the exciting race atmosphere it creates by hosting its first-ever all-collegiate and junior sprint triathlon on campus Sept. 21.

"We in Club Sports are very, very excited for the opportunity to host our first collegiate triathlon right here on Liberty's campus," said Kirk Handy, senior director of campus recreation.

It will be one of only a few triathlons in the country held on an actual university campus, avoiding the use of surrounding county or Lynchburg City police departments or the closing of area public roads.

"Others may have hosted an event, but it was held out on a lake or something, like if we did it at Ivy Lake," Liberty triathlon head coach Beth Frackleton said. "We'd be hosting it, but it wouldn't be on our own campus."

The Liberty University Collegiate Triathlon, which has received sanctioning from USA Triathlon, will be shorter than a standard sprint triathlon such as the annual Angels Race Triathlon, which members of Liberty's teams have competed in in the past.

Similar to that event, which starts in the Downtown Lynchburg YMCA pool, the race will begin with a 274-meter (300-yard) snake swim through the six 25-yard lanes in the LaHaye Student Union Aquatic Center pool.

The swimming leg will be followed by a three-loop, rolling 18.5-kilometer (11.5 mile) cycling stage around Liberty's scenic campus before concluding with a 5.15K (3.2-mile) run.

"The course will not be overly hilly, but the race will be extremely spectator-friendly," Frackleton said. "That's really an excitement piece to it. Really, you'll have more spectators than usual. It's almost like a (cycling) criterium because it's up close and it's three laps."

Liberty University Police Department will monitor the race as well as coordinating the necessary road closures.

Frackleton is in the process of lining up a maximum of 100 competitors from any of a number of schools who compete in the Mid-Atlantic region. One of USA Triathlon's 10 regions, it consists of Pennsylvania, Maryland, New Jersey, Washington, D.C., Delaware, West Virginia, Virginia, and North Carolina.

Frackleton anticipates entering the majority of her men's and women's club teams, though she doesn't expect them to have a major home-course advantage since they don't normally train on campus, but on back roads and off-road trails.
A pre-race packet pickup and dinner for all of the incoming athletes as well as Liberty's participants will take place on Friday night. Race-day registration also will be available from 6-7 a.m. prior to a 7:30 a.m. course walk-through and 8 a.m. race start.

Liberty has secured a timing system through Jeff Fedorko, race director for the Virginia 10 Miler, which will use the same equipment for its races the following weekend (Sept. 27-28).

"About a week before the event, he said we could do, not a trial run, but kind of a run-through of where the timing is," Club Sports assistant director Dave Semenyna said. "He'll be able to set it up, so that's good."

Due to the staggered start, with one triathlete entering the pool at a time, rather than the typical mass start in a larger body of water, the race leaders may not be obvious to spectators and the winners won't be announced until all of the competitors have completed all three phases of the course.

When the results are finalized, there will be a post-race awards ceremony with medals for individual place winners and trophies for the top overall teams.

Because the race is USAT-sanctioned, participating triathletes will earn points toward their overall USAT rankings.