Flames' phenomenal season ended in OT by No. 1 St. Thomas 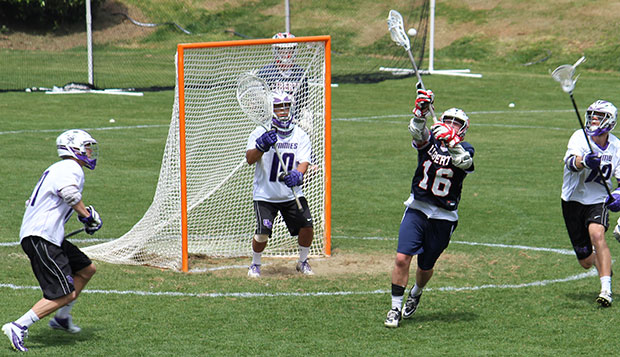 Flames' forward Joe Gargiulo (16) reaches for the ball as he is flanked by St. Thomas defenders in front of goalie Steven Bang during Thursday's semifinal at Sirrine Stadium in Greenville, S.C.

For the third time in as many games in their first national tournament, the Flames fought back valiantly from at least a three-goal second-half deficit, forcing a four-minute, extra period after trailing 8-4 at the half.

Freshman Charles Fianko gave the Flames possession to start overtime by winning his fifth straight faceoff, but Liberty lost the ball out of bounds on a controversial call and the Tommies quickly capitalized.

Just a minute into sudden-death action, St. Thomas midfielder Will Hersman sneaked a running shot from the right side past Liberty goalie Ethan Kamholtz into the upper netting for the game-winner, his only goal of the day.

"Overall, it was a great game," Liberty head coach Kyle McQuillan said. "We were able to hang with them and that second half, we dominated. The second half was all Liberty. We held them to one goal in two quarters.

"The guys played really well and we took the No. 1 team in the country to overtime, which no one else has been able to do," he added. "I think we played one of our best games of the season and we needed to against St. Thomas. We just came up barely short. We know how close we were to upsetting them."

The top-seeded Tommies (16-0) advance to their fifth straight national championship game and will seek their fourth title in that span Saturday when they face second-seeded Westminster, a 9-8 triple-overtime winner over St. John's in Thursday's first semifinal. St. Thomas edged the Griffins, based in Salt Lake City, Utah, 11-10 on Feb. 16.

The fourth-seeded Flames (18-2) nipped No. 13 North Dakota State 12-11 in overtime in Monday's MCLA DII nationals first round before edging No. 12 Grove City 10-9 in Tuesday's quarterfinals, rallying from three goals down both times.

"Of the three games we played, the margin was one point in each one," McQuillan said. "If you keep pushing the limit, eventually you're going to get bit."

"He had just a phenomenal year," McQuillan said, noting players like Miller will ease the Flames' transition to the Division I level next season. "His stats and recognition speak for themselves. We have such a young team and have had such success with guys like that. Moving up to Division I is going to be a tough step and there are going to be hurdles but when you've got a freshman with 100 points, that's incredible."

Tobias ended the Tommies' scoring streak with a goal on transition after senior long-stick midfielder Mike Zumpano made a clearing run. The Flames' attack was snuffed for the last half of the second quarter before freshman Bryce Mrakovich scored on a laser shot from the right side off an assist from Derek Haywood less than two minutes into the third quarter.

Miller, who had started Liberty's scoring, then finished a run through the right side with a deceptive behind-the-back shot, trimming the gap to 8-6.

But David Burke extended St. Thomas' lead back to three goals by putting away a point-blank shot in the right crease off a behind-the-goal assist from Peter Carbonneau, who paced the Tommies with two goals and three assists.

Gargiulo, who was shut out in the second and third quarters, got the Flames back in the game with two scores in the first four minutes of the fourth, the last a wraparound shot behind his head off Miller's third assist from behind the cage.

Then, after sending a pass to Haywood, who ran around the back side of the goal, Mrakovich received a return pass and rifled in the tying score from the left wing with 8:09 remaining in regulation.

Despite being outshot 47-30 for the game, Liberty outshot the Tommies 13-4 in the fourth quarter. Kamholtz made 15 saves for the contest, including a couple game-savers in the final six minutes.

Though Liberty maintained possession for most of the rest of the fourth quarter, it didn't put another quality shot on goal. After running a slow-down offense with 1:44 to go, Haywood lost control of the ball on a run toward the cage and it trickled into in the goalie circle, where Steven Bang picked it up, ending the Flames' threat with 31 seconds left.

"They kind of locked us out," McQuillan said. "They are a team that plays man-to-man (defense) all the time and we forced them into a zone. They did a good job of making us be patient. We had our chances, but weren't able to capitalize."

St. Thomas boasted a decisive advantage in numbers, but the Flames held their own with their starting lineup playing the majority of the minutes.

"They had close to 50 guys on their roster and we came in with 26 and dressing 23," McQuillan said. "Numbers were definitely not in our favor. But that's why I work these guys so hard and condition them the way we do. We had guys going for four quarters, not get any breaks, while they were able to cycle in two or three lines of middies. We were able to do a whole lot more with a whole lot less. They could only put 10 guys on the field and I told my guys I'd take my best 10 any day of the week. I think they proved themselves today."