Flames snuffed by BYU in MCLA Invitational opener in Texas 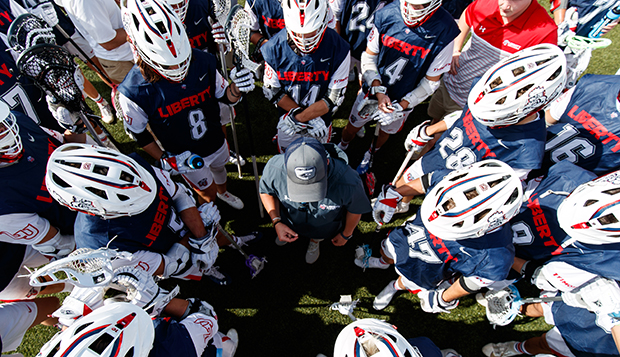 In a first-ever battle with BYU, a four-time MCLA Division I national champion, Liberty University's men's lacrosse team opened an early lead before slowly fading in a 10-7 first-round setback in the MCLA Invitational, Wednesday afternoon at the Round Rock (Texas) Multipurpose Complex.

"We knew we were going to have to get a top performance out of everyone in order to (beat BYU) and from top to bottom, on both sides of the field, this was not our best showing," Liberty Head Coach Kyle McQuillan said. "It was pretty cool, a good day for lacrosse, and we should have been ready to play today, but I didn't feel like we played to our potential."

"One thing that was pretty pivotal in BYU's success and our lack of success was in the transition game," McQuillan said. "They had some really good poles (long-stick midfielders) and were able to possess, transition, and get the ball into the offensive zone and run their offense. We struggled with our clear and our 10-man ride wasn't as effective as it has been in the past. Faceoffs were pretty one-sided as well as we struggled with our consistency."

The Flames got out to a fast start, seizing a 1-0 lead just 1:34 after the opening faceoff when senior midfielder Carter Elliott received a pass from freshman middie Keaton Mohs and drove down the left side of the box before firing a shot into the upper netting.

Moments later, after a deflected forearm save by Flames senior goalie Ryan Reynolds, Mohs fought off a BYU defender as he penetrated for a point-blank finish past Cougars goalie Mason Moon and a 2-0 Liberty lead.

Midfielder Patrick McNeil cut it to 2-1 after receiving BYU attack Seth Garff's pass from behind the cage and beating Reynolds with a low shot through the five-hole and tied it at 2-2 after winning the ensuing faceoff on a man-up goal by Jake Halversen from short range on the right side.

Caleb Britton gave the Flames a 3-2 lead by catching and releasing fellow senior attack Jackson Miller's assist from behind the net directly in front.

Junior middie Cameron Carter picked up Miller's pass from behind the goal near the top of the box and fired a shot that ripped into the upper netting. But midfielder Rylan Mills answered for BYU on the other end, trimming the deficit to 4-3.

Liberty missed an opportunity to capitalize on a two-man advantage when Moon blocked a shot by Elliott. But with the teams back at even strength, Mohs took a pass from freshman middie Ryan Merbach and made a spin move before depositing a left-handed shot into the top left corner of the net to extend the Flames' edge to 5-3 with 9:44 left in the second quarter.

Left unguarded, Jacob Berndt unloaded a shot from the left perimeter that got past Reynolds. Then, with 3:35 left in the second, Gavin Crist bounced the first of his four goals inside the lower left corner of the cage, knotting the score at 5-5.

"They were finding a lot of success in shooting low and getting those bounce shots today at different levels, which threw us a changeup," McQuillan said. "Ryan made some good adjustments and he played much better in the second half."

Reynolds saved a low bounce shot early in the second half before Elliott set up sophomore attack Nathan Spears with a cross-crease assist for a fast-break finish with an overhand shot, slicing the Cougars' lead to 7-6.

BYU capitalized on a man-up situation when Crist converted another bounce shot from the top of the box to make it an 8-6 contest before Halversen extended the Cougars' advantage to 9-6 early in the fourth quarter on a running shot over two Flames defenders into the upper netting.

"I was happy with the looks we were getting on the offensive side of the ball, but we weren't finishing off a lot of them," McQuillan said. "We would have liked to keep that same pace that we started with, but credit goes to BYU for slowing our offense down and taking away a lot of opportunities."

Carter cleared the ball nearly the length of the field before cashing in unassisted from the right side of the box, making it a 9-7 contest. However, BYU responded by working the ball around the horn with Crist brushing off a Liberty defender, spinning, and unleashing a running shot from the left side past Reynolds for the final score.

"We came up short today against a good BYU team," McQuillan said. "Obviously, that was not the way we wanted to finish our season, on a loss. Today was definitely a hard pill to swallow and was not the outcome that we anticipated, but this year (with COVID-19 restrictions), our willingness to persevere and just to be able to get on the field was a win."

The Flames and Cougars met for a post-game prayer, providing fellowship between the two programs with players of different faiths.

"There are a lot of similarities between BYU and Liberty, and it was a good opportunity to get together and have some closure after the game," McQuillan said.

The Cougars, whose only loss came against No. 1 West seeded Chapman, 6-5, in Orange, Calif., advances to Thursday's semifinal against Georgia Tech, the No. 1 seed out of the East.

Liberty, the inaugural Atlantic Lacrosse Conference tournament champion, will play a consolation game against either Utah Valley, which lost to the Yellow Jackets, 17-6; Concordia-Irvine, which lost to ALC runner-up Clemson, 16-11; or LSU, which fell to Chapman, 16-5, at a time to be determined.

"We experienced quite a few injuries today, so we'll regroup and use that (consolation game) as a chance to get guys in who haven't had the opportunity to get on the field as much and start building for next year," McQuillan said.