Flames set for first-round MCLA matchup with BYU in Texas 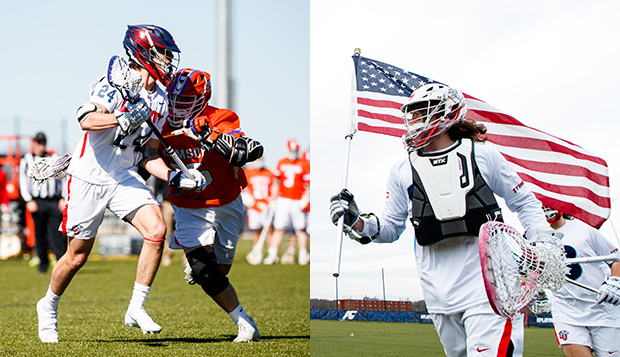 Elliott and Reynolds were named the Offensive and Defensive Most Valuable Players in the inaugural Atlantic Lacrosse Conference (ALC) Championships, won by Liberty in impressive fashion as the Flames avenged a loss at Clemson in the May 2 final at the Liberty Lacrosse Fields.

"When you have guys like Ryan and Carter leading the way on both sides of the ball, that makes us a very difficult team to beat and dangerous team to stop," Liberty Head Coach Kyle McQuillan said. "They have been big pieces of our success for many years and going into this invitational in Texas, those two guys are leading on their ends of the field."

Reynolds sees Elliott as a sparkplug who delivers in clutch situations to ignite the Flames' attack.

"Carter's really been our go-to guy for as long as I've been here," Reynolds said. "He's been one of those guys we look to for energy. We know if he has the ball, he's going to score."

Elliott overcame upper- and lower-body injuries to save one of the best games of his career for the ALC final, when he netted six goals and three assists. He is complemented by senior attackmen Jackson Miller and Caleb Britton and freshman middies Keaton Mohs and Ryan Merbach.

"Our midfielders are given a lot of responsibility leading both offensively and defensively," McQuillan said. "We rely on our middies to be very involved in the offensive side of the ball and Carter is definitely coming on at the right time of the year."

The last time the Flames competed in the MLCA National Championships, on May 6, 2019, in Salt Lake City, Elliott scored five goals in a first-round victory over reigning champion Michigan State.

"I feel like I can get past my guy and if the goal isn't open, I feel like I drew enough guys to where I can find an open guy on the back side," Elliott said. "Hopefully, we can do the same thing in Texas. It's been a tough year, but through all that, we've just risen to the occasion."

Elliott and his teammates know Reynolds will have their backs.

"Ryan is the best goalie I've ever played with," he said.

"(Reynolds) has been the picture of consistency for us this year, not really having a bad game," McQuillan added.

The ALC announced its all-conference teams last week, when Reynolds was honored as defensive player of the year and joined by Elliott, senior defenseman Reagan Pritchett, senior long-stick midfielder Andrew Lazina, and junior attack Cooper Branham on the first team.

Now, McQuillan hopes the Flames, the No. 3 seed out of the East, can earn some national recognition and make a major impression in Round Rock, where the 2022 MCLA National Championships are also scheduled to be played.

"To represent the ALC at the MCLA Invitational is a great opportunity and we know we want to go out the right way to cap off this very difficult and unique season (due to COVID-19)," McQuillan said. "If we can keep rolling the way we played against Clemson, we are a team that can definitely be in the mix to win it all in Texas."

"We still have a lot more games to play down in Texas," Reynolds added. "I think we're ready for it. We're going to see some great talent, but we've seen great talent all year, teams like Georgia Tech and Clemson.  I have full confidence we'll be fully prepared."

The Flames' first-ever faceoff with the Cougars, the No. 2 team out of the West, has the potential to be an instant classic.

"We have been out to Utah a number of times, but have never had the opportunity to meet BYU, which has been a pretty strong team within the MCLA from year to year," McQuillan said. "To play a program of their stature and success, it is probably one of the most attractive matchups of the first round. We want to try to represent ourselves and our school and our God to every team we play and hopefully, every team we play will see that we're a little different."

McQuillan said he and his coaching staff tweaked their game plan for BYU during practices last week, but the Flames will look to establish their brand of play and not conform to the Cougars'.

"Every time you go to a different geographic of the country, you need to make minor adjustments," he said. "We want to focus on what we know works for us and the things we need to do to be successful, and be consistent."

With a win over the Cougars, the Flames (7-2) will face the winner between Wednesday's 11:30 a.m. (EST) quarterfinal matchup between Utah Valley, the No. 4 seed out of the West, and Georgia Tech, the No. 1 seed out of the East, on Thursday at 12:30 p.m. (EST). The Yellow Jackets dealt Liberty its first loss on March 20 in Knoxville, Tenn. Wednesday's other quarterfinals pit No. 4 East seed Louisiana State University against No. 1 West seed Chapman at 11 a.m. (EST) and No. 3 West seed Concordia-Irvine against No. 2 East seed Clemson at 2:30 p.m. (EST). Friday's championship game is set for 11 a.m. (EST).

Streaming packages for all seven games are available through the MCLA website. 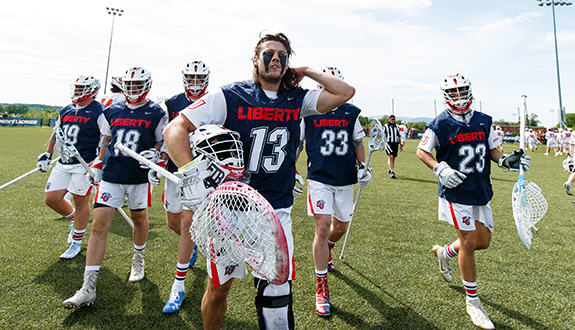 Ryan Reynolds (13) leads his defensive line off the field after the ALC finals triumph over Clemson.