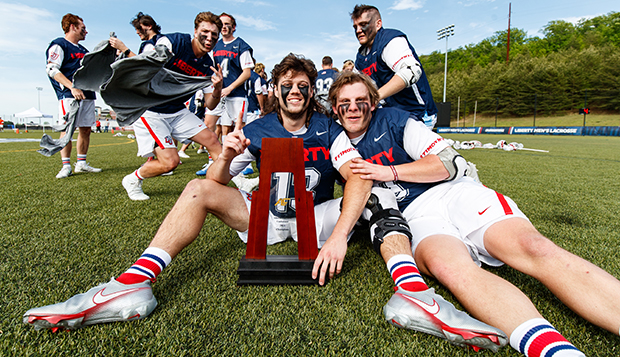 "It was a lot of fun," Reynolds said. "The feeling is really indescribable. I don't think I can wrap my head around it, still. Just seeing our team play to our full capability, championship aside, was good enough for me. The fact that it was for the championship, that's icing on the cake. It's unbelievable."

That the Flames captured their first-ever MCLA Division I conference championship in such convincing fashion was sweet reward for a resilient squad that saved its best performance of the season for the game that mattered most.

"That was the best game of lacrosse we've played all year, from the defensive side of the ball to the offensive side of the ball, from the first whistle to the last," Liberty Head Coach Kyle McQuillan said. "When this team plays at the level that I know they are capable of, this is what they can do. Today, they brought their A game, and it was a great performance."

To take the title against a team that had dealt Liberty (7-2) its only ALC setback of the season, April 17 in South Carolina, was all the more satisfying, especially for Elliott, Reynolds, and the 11 other seniors who missed the opportunity to play for SELC and MCLA  titles when last season was cut short by COVID-19 restrictions.

"They beat us fair and square the first time," McQuillan said. "They outplayed us, they outworked us, and for us to be able to come back and win so convincingly felt good."

The Tigers (5-4) held a 35-34 shot advantage for the contest, but Liberty won the ground ball battle, 44-29. Clemson also won 17 out of 28 faceoffs, but the Flames successfully cleared the ball more often when they gained possession, advancing into Tigers' territory 23 out of 25 times.

In the only statistical category that counted in the end, the Flames dominated, outscoring Clemson 5-2 in the first quarter and 7-0 in the second and third combined to seize a 12-2 lead going into the fourth.

Jackson Miller (1 goal, 2 assists) made a one-handed stick pickup of a loose ball after a failed Clemson clearing attempt and set up fellow senior attack Caleb Britton (5G, 1A) for a finish in front to spark the Flames' attack early in the first.

Tigers middie Jacob Magelssen answered by ripping a shot into the back netting on a drive down the center of the box at the 11:36 mark before Elliott fired a low left-handed-shot through the legs of Clemson goalie Lad Howell.

Miller picked up a loose ball in the left side of the box and fed Britton cutting into the box unguarded for an easy one-on-one finish with 8:36 left in the first quarter. Clemson cut it to 3-2 on a shot by middie William Ciccarelli before Elliott gave the Flames a 4-2 lead with a running shot into the upper netting.

The Flames capitalized on a fast break at the 2:14 mark of the first period when Reynolds saved a shot near the right post and freshman middie Keaton Mohs finished at the other end off an assist from Elliott, stretching Liberty's lead to 5-2.

"That's the whole team mentality, whatever it takes to win," Reynolds said. "Our whole job as a defense is to get the ball to the offensive side of the field, so the faster we can do it, the more we know we are going to score."

Reynolds saved a high shot by Tigers' attack John Holcomb and a low shot through traffic by middie Coston Pendleton early in the second quarter. He later made a kick save of Pendleton's shot from the right side with 5:09 remaining before reaching high to snare Ciccarelli's attempt from the top left side of the box.

"Ryan is Ryan," McQuillan said. "He's the heart and soul of our team and our team captain, and there's nobody that's more deserving (of Defensive Tournament MPV honors) than him."

Elliott finally opened the second-quarter scoring with a running bounce shot on a fast break the other way, extending Liberty's lead to 6-2. Moments later, Reynolds made a lunging save of Pendleton's bounce shot from the right perimeter and sophomore middie Remy Newton set up senior middie Noah Rude for a running shot inside the lower left corner, expanding the edge to 8-2 at the 1:57 mark.

Following a timeout with just over 5 seconds remaining in the first half, Elliott capped the scoring 0.6 seconds before halftime with an unassisted goal as he cut across the box, giving the Flames a commanding 8-2 halftime advantage.

Elliott picked up where he left off in the second half by receiving a pass from junior middie Cameron Carter and unleashing an unstoppable shot from in the left side of the box into the top right corner, padding Liberty's lead to 9-2 at the 13:20 mark. Just over a minute later, Elliott spotted Britton cutting across the crease and fed him a pass in front for a point-blank finish to make it a 10-2 contest.

Mohs skipped a pass through the box that Miller picked up in the left crease before making a quick move toward the cage and bouncing a shot into the net to stretch the lead to 11-2 with 8:19 left in the third quarter.

Reynolds made another body save near the right post and another stick save of a Magelssen shot in the lower left corner before Elliott ended the third-quarter scoring the same way he started it, by rifling a shot from the left side of the box past Howell, this time inside the left post.

Clemson finally ended its scoring drought when Magelssen threaded a cross-crease pass to attack Devon McIntyre near the right post for a five-hole finish before Magelssen put away a low shot from the top left of the box and Tigers' attack Will Marrapodi assisted Holcomb to trim the deficit to 12-5 with 10:32 to go.

Mohs ended Clemson's three-goal run by emerging from behind the right post and sneaking a backhanded shot past Howell with 9:23 to play. After freshman Ryan Merbach put Liberty up 14-5, McIntyre scored off the ensuing faceoff and added another goal to cut the deficit to 14-7 with 5:49 remaining.

Carter assisted a turnaround shot by Britton as he came out of the crease before Magelssen responded to trim it to 15-8. Elliott assisted Britton's final score with 2:56 to go before Britton found senior attack Thomas Pinel open in the right side of the box for a bounce shot past Howell at the 1:36 mark.

"It's the first conference championship we've ever won, so it just feels awesome," Elliott said. "We've just risen to the occasion through it all, and hopefully we can do the same thing in Texas."

Seeded third out of four teams from the East, Liberty has only a week and a half to prepare for the May 12-14 MCLA Invitational and a first-round matchup with Brigham Young University, the No. 2 seed from the West.

"I have full confidence that we are ready for it," Reynolds said. "We're going to see some great talent, but we've seen great talent all year, including teams like Georgia Tech and Clemson (who the Flames could face again at nationals). We're going to hit this next week hard, travel down (to Texas) on Monday and see what we can do."