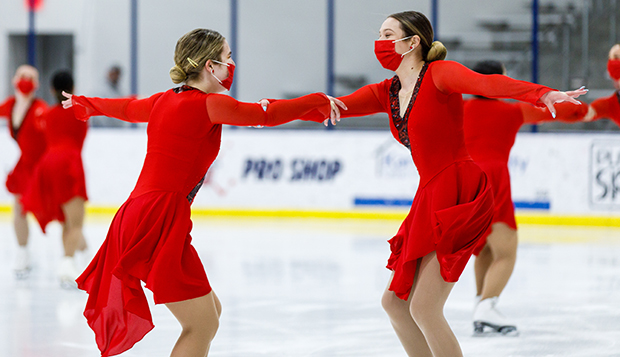 Synchronized skaters performed before a live audience at the Division I Flames men's hockey game against Ohio on March 19 at the LaHaye Ice Center. (Photo by Chase Gyles)

As it prepares to showcase its program for a live audience in this Saturday's 4 p.m. "Exhibition of Hope," a ticketed event with a limited audience at the LaHaye Ice Center, Liberty University's synchronized skating team is reflecting on reasons to be thankful for the season that it was able to have.

"We had an opportunity to practice all throughout the fall semester, which was a huge blessing to our team," Lady Flames Head Coach Emily Hughes said. "In the spring, we were able to compete. We participated in two virtual competitions and also performed at our (March 19) men's Division I hockey game and then we have an ice show at the LaHaye Ice Center coming up (Saturday)."

Lady Flames freshman Jacalyn Hagar said the season had its ups and downs, but the young skaters grew though the experience.

"It's been a rollercoaster, but I'm so thankful for every opportunity that is coming out of it," she said. "We had a very young team, with a lot of underclassmen … and we were all coming in with different skills, but we were still able to grow off of each other and help each other out in a positive way."

Fellow freshman Jamie Gordon said the season was a difficult one due to the restrictions put in place by COVID-19, but the skaters used the down time to build one another up and create a really good community within the team.

She did say virtual events did not offer the same thrill as competing in front of a live audience.

"We didn't have the adrenaline that you would normally have walking into a competition in a stadium full of people which is really what I love about this sport, all of the people you get to see and being able to connect with the audience," Gordon said.

For that very reason, Hagar is excited about Saturday's exhibition, which will also include individual performances from members of the Lady Flames' figure skating team.

"It's such a blessing to have," Hagar said. "This is our opportunity to perform with a crowd and to have people watch us as in person. We're preparing as much as we can for that, and we are really excited to debut our program for other people." 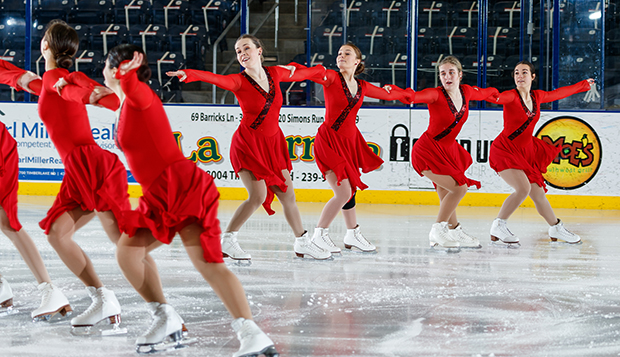 The Lady Flames practice their routine on Jan. 25 at the LaHaye Ice Center. (Photo by KJ Jugar)