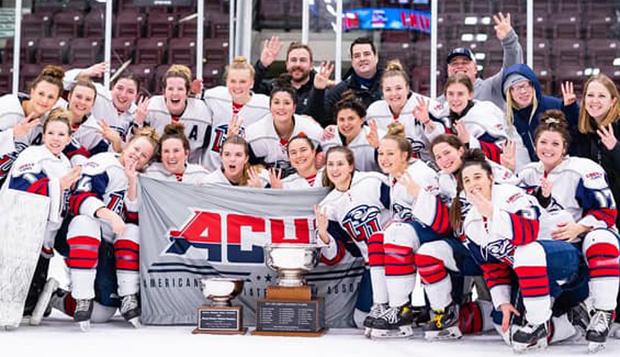 "Yannick played well all week long," Lady Flames fourth-year Head Coach Chris Lowes said. "She is an incredible athlete and she did a lot of damage. For girls like Val (Manchak) and Yannick, this is their second year on the team and their first championship. They endured two long seasons, lots and lots of practices and work, and they finally got a title. When they came to Liberty, they realized that was the goal."

The Lady Lions (14-9-1) were the only other ACHA DI women's team to accomplish the feat of capturing three consecutive crowns. It was the fourth national title overall for Liberty (19-1, 15-1 ACHA), also matching Lindenwood's record total (set in 2006 and from 2008-10).

"We have built quite a rivalry and just as much mutual respect for each other," said Lowes, who was named ACHA DI women's hockey Coach of the Year for the first time last week. "I feel a sense of relief and pride in what our girls have done. It is pretty special and impressive, and exciting, something that I'll remember forever. I'll remember this group, and this is something these girls will have to cherish for the rest of their lives."

Liberty freshman goalie Kylie Mebs came up with a clutch save at the 10:21 mark of the first period, reaching back to smother Hannah Jensen's putback from close range with her glove, preserving the scoreless tie.

"That was as close to a goal as you could get, as I watched the replay and saw Mebs pivot and make that save," Lowes said. "That changes the outlook of the game, as we found a way to get one at the end of the first period and go up 1-0 instead of trailing 1-0. Then we won the second period 1-0 and we got the first one in the third. We made some mistakes, but the girls picked each other up and found a way to battle through."

"She did the things asked of her and didn't play like a rookie," Lowes said. "Mebs stood tall. She was calm and composed, and defensively, you couldn't ask for any more."

He noted that the Lady Flames wouldn't have been in the final without fellow freshman goalie Amanda Storey and the job she did against Midland in Sunday's semifinal, when she also made 18 saves in a 3-2 semifinal victory over Midland.

On Monday night, Liberty senior forward Danica Polson nearly sniped the first goal around the 6:00 mark after maneuvering the puck through Lindenwood players in the high slot and launching a shot that Lady Lady goalie Emily McDonald glove saved in the top right corner of the cage.

Manchak then capitalized on a Lindenwood turnover in the slot, trapping the puck and one-timing a slap shot inside the right post. The Lady Flames lead remained at 1-0 until Manchak struck again with 3:33 remaining in the second period, gathering a loose puck off a faceoff in the Lady Lions' right circle that slid into the slot and unleashing an off-balanced wrist shot under the blocker of McDonald inside the lower-left corner of the net, doubling Liberty's edge to 2-0 before toppling over a Lindenwood player face-first.

Lady Flames senior defenseman Sydney Pierce was checked to the ice in Lindenwood's right circle, putting Liberty on the power play at the 2:04 mark, and it needed only 12 seconds to capitalize. Alex Smibert received an assist from fellow senior forward Vanessa DeMerchant along the right endline and squeezed a sharp-angled shot from off the back of McDonald's leg and inside the right post, stretching the lead to 3-0 going into the third period.

"That was really big to get that power play goal on a veteran move for Alex to execute," Lowes said.

Liberty killed a penalty in the final five minutes of regulation with Mebs making some key saves before the Lady Lions finally ended her shutout bid with 1:26 left when forward Kennedy Frank lifted a wrist shot from deep in the slot over Mebs' glove for the game's final score.

"Hockey's a hard sport to win (regularly)," said Lowes, who improved to 116-7-4 in his four seasons behind the Lady Flames' bench. "With the success we've had, there's times we win and it's almost a sense of relief because our expectations are so high. (Assistant) Coach Justin Forth and I have an unusual approach to that, and the girls came together and did a great job, checking off that final box."

Lowes credited Liberty's Club Sports strength & conditioning and athletic training staffs for putting and keeping the Lady Flames in peak physical condition heading into and going through five games in five days at the national championships.

"We knew once the nationals format was setthat our depth and conditioning was going to be a big thing," Lowes said. "We've had 8-10 girls with significant injuries and if it wasn't nationals, they probably would have been scratched. Val (Manchak) came back early from injury, after having two major surgeries in the last 12 months. It's a credit to her conditioning and resilience and her commitment to come back and get the job done, and we needed her."

He said that it took a complete team effort for the Lady Flames to pull off the trifecta, after repeating as WMCH Tournament champions late last month in St. Louis.

"So many girls played a big role, top to bottom," he said. "We lost a lot of girls from last year's team and found girls to fill those holes and take this team to the next level. The future's bright. We'll take a couple days to celebrate and we'll get back to work. I'm already excited to get started again in the fall."

Members of Liberty's and Lindenwood's programs pray around center ice at the Maysa Center.