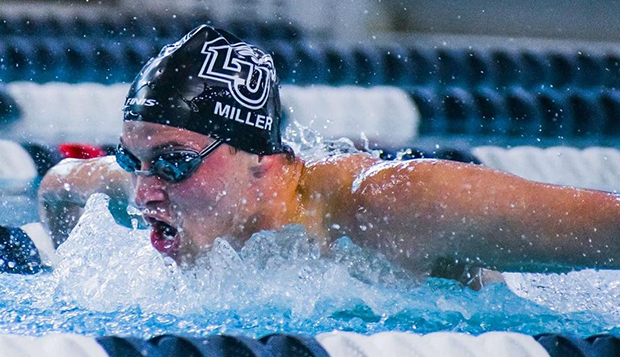 "It was the best meet we've had in our history," Flames Head Coach Heath Grishaw said. "Across the board, it was awesome to see how many lifetime bests we were getting, how many kids were getting up and swimming fast."

He said with the field of swimmers being relatively small for the three-day championship format meet — especially compared to a normal CCS national championships held at one location — there was less time between races for competitors to recover from one event to the next.

"It was a very quick meet, not having all of the teams there, so watching guys recover well, get rested and swim again, it's impressive how well they all did," Grishaw said. "I was really happy. Everybody competed very well. A lot of families flew in and drove to the meet, which was exciting and meant a lot to the guys to be able to swim in front of people, even in a small capacity."

Junior Matt Davidson also had a phenomenal weekend, swimming lifetime bests in the 50 backstroke, 100 freestyle, 100 back and 50 free.

"Matt was the anchor of our winning 200 free relay and swam a 19.88 second 50 free leg, which is insane," said Grishaw, noting that in the individual 50 free race, he broke the CCS meet record with a time of 20.37. "Unfortunately, they won't be counting it because of the year we are having," with COVID-19 reducing the field.

The various CCS virtual competitions and another tri-meet featuring Florida and Clemson at Georgia Tech, where the national meet was originally scheduled to be held, will be completed by this coming weekend and the Flames will find out next week how they fared on a national level.

Davidson also swam a time of 1:39 in his 200-yard leg of the Flames' winning 800 free relay, led by Boehme, senior Ben Klipp, and graduate Noah Miller, which smashed the school record in that event set during its eighth-place nationals finish in 2019 by eight seconds.

He said Davidson exemplifies the type of approach to training he wants to see from all of his swimmers.

"Not only does he add talent on the swim side of things, but he is a strong Christian, loves the Lord with all of his heart, and is a great teammate," Grishaw said, noting that his attitude has been refreshing. "Even with COVID, I haven't heard him say one negative thing. It is wild to see how well he's adapted to something like this. He is happy to be here, excited to be a part of Liberty University, and I love that."

The Flames' most improved swimmer was sophomore Carter Helsby, who would have scored at the 2019 CCS national championships based on his times in the 200 and 100 breaststrokes.

That was still one second behind sophomore teammate Christian Dilena, who won in 58.9 seconds.

"All of our relays would have been in the top five (at the 2019 CCS nationals), which is insane," Grishaw said.

He will take Davidson and Helsby to the Speedo Sectional meet in Richmond from May 13-16, where Davidson will try to achieve qualifying times in the 100 back and 50 free for the Olympic Trials in Omaha, Neb., in June.

Grishaw, who will complete his M.S. in Sport Administration in May, expects to have an extremely deep recruiting class for this coming fall, his fourth season at the helm, while graduating only three swimmers — Klipp, Miller, and Caleb Rice. 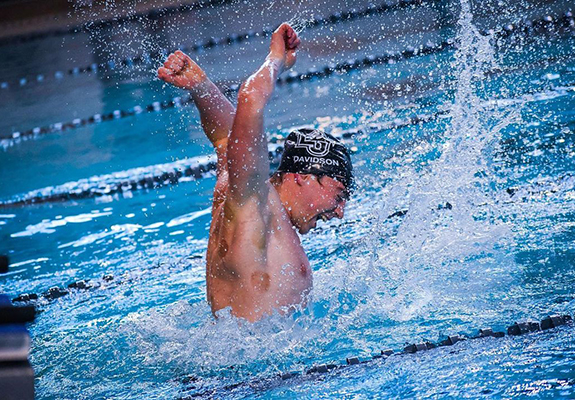