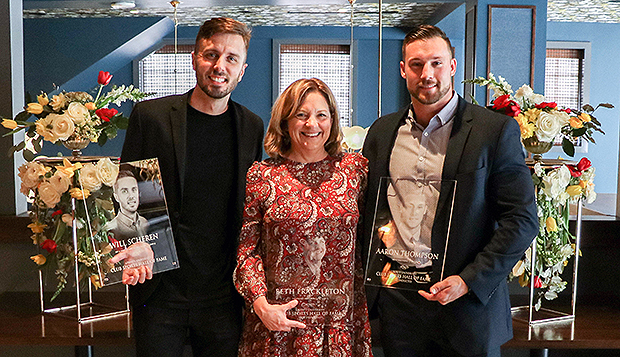 During Saturday afternoon's seventh induction ceremony at The Virginian in downtown Lynchburg, Liberty University's Club Sports Hall of Fame added three pioneers who pushed the envelope of what student-athletes could accomplish — on the wrestling mat, ski and snowboard slope, and in the three phases of a triathlon, as well as in life.

"Aaron's success is a testimony, not only to his God-given talent, but also for the work ethic and his obedience to the Lord," Flames men's wrestling Head Coach Jesse Castro said of Thompson, who was one of fewer than a dozen wrestlers who stayed with the team after it was declassified as an NCAA Division I sport and went on to become a three-time NCWA All-American. "He could have taken a shortcut, but he stayed with it and helped us as a program to turn the corner and we're so proud of him."

Castro referred to Thompson as a Superman of a role model for his teammates for not only his physical strength, but his attitude, character, and self-discipline.

Thompson, who grew up playing baseball and football, enjoyed the team and individual aspects of wrestling. He discovered the sport before high school and learned life skills and lessons through competing in it at the prep and collegiate ranks.

"You reap what you sow and the only person to hold accountable is yourself," he said. "The fundamentals I learned while here at Liberty have given me the ability to achieve success on a multitude of levels — in my career meeting and exceeding goals, in my spiritual walk, as a husband and a father, so to Him be the glory."

"If you know Beth well, you know under her bubbly personality is a fierce competitor," said Fritz, who was inspired by Frackleton to join the first-year program back in 2009 and served as her assistant coach from 2012-14. "Pioneering something new without a roadmap to success can be hard to imagine. Thankfully, there are some people whose passionate imagination looked past those barriers to see only opportunity. They are selflessly willing to take the first step knowing the foundation they lay will benefit others for years to come."

He noted that many of the athletes she coached are now "following in her footsteps, coaching triathlon all the way up to the Olympic level (referring to her successor, Parker Spencer, who is now USA Triathlon's Project Podium head coach) and sharing their passion with others."

Frackleton, now a health and wellness coach for University of Virginia Health in Charlottesville, where her son, Zach, is completing medical school, said she wanted to make a difference in the lives of those she coached.

"My favorite thing in life is to help others be their best selves," she said. "When you're a coach, you're more than a coach, you're a parent, you're a teacher, you're a mentor, you're everything to those kids. I wanted to help them grow spiritually, emotionally, and physically."

Though she no longer coaches the sport, Frackleton, who will turn 60 in June, still trains for and competes in triathlons.

"Sports teach us so much," she said. "Sometimes things don't go so well, but you don't fail. You learn from it. You keep going."

Scheren, who now serves as director of online engagement in Liberty's Office of Spiritual Development, was introduced by his successor at the helm of the ski and snowboard team, Ryan Leeds, currently the director of leadership training for Skiers & Snowboarders for Christ in Colorado.

He said Scheren combined a passion for the sport and a vision for what the fledgling program could become, a USCSA national championship contender. As a coach, he wouldn't shout instructions at his skiers and riders, but led by example out on the slopes, jumps, and rails.

"In ski-snowboard culture, we call it dropping first," Leeds said. "Will would always try to inspire athletes to go for things that he knew they could do, but he didn't know they could do yet."

He said, as a coach, Scheren was focused on holistic growth and development of his teams' members.

"Will really invested into the athletes," Leeds said. "They were more than just athletes on a roster to him. They were friends. He cared about where people were going and what their goals were, and I think that's what made him such a good coach. He is one of the most generous, hospitable people that I know. He will literally go out of his way to do anything for anyone."

Scheren said that is how he has felt treated by everyone in the Club Sports administration.

"Liberty's Club Sports department is a world-class (organization)," he said, referring to its growth as a 40-plus-sport athletic program over the past dozen years as phenomenal. "I love the story of its birth of a rag-tag group of students who started a hockey team that piled into each other's cars to make the drive to Roanoke to compete against other schools that would play them. Man, has this program taken off. With facilities, medical care, logistics support, and exceptional coaching, LU Club Sports has made this program an asset to Liberty that is capable of drawing exceptional student-athletes." 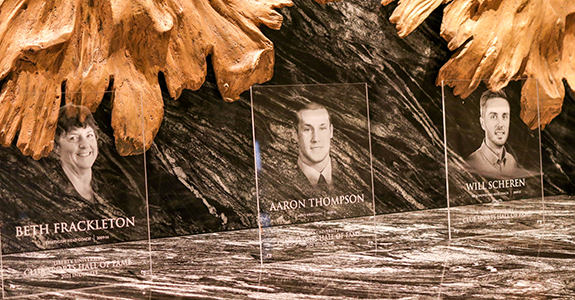