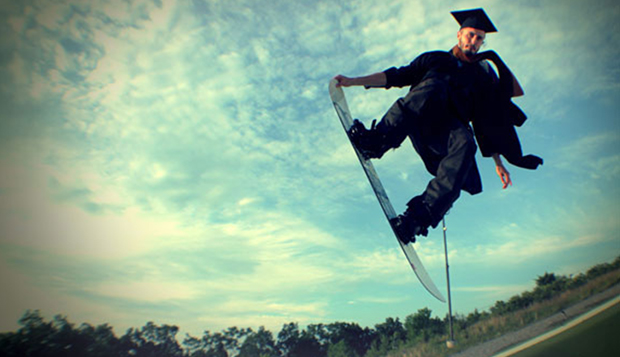 Will Scheren never competed for the Flames, but demonstrated his skills in the sport on a regular basis at Snowflex, including in full regalia after Commencement 2012. (Photo by Kyle Scheren)

Before serving for the past five years as Director of Online Engagement through Liberty University's Office of Spiritual Development (OSD), Will Scheren launched his career as head coach of its men's and women's ski & snowboard teams and operations manager at the Liberty Mountain Snowflex Centre (LMSC) from 2009-13.

One of three members of the seventh class of the Club Sports Hall of Fame that will be inducted Saturday afternoon at The Virginian in Downtown Lynchburg, Scheren has not forgotten his roots, and is extremely grateful for the opportunity he was afforded during his foundational years spent on Liberty Mountain.

"Going on record, our Club Sports department is phenomenal," said Scheren, who graduated from the School of Business in 2008 and earned his M.B.A. in 2012. "I couldn't imagine being provided any more of an opportunity for the ski and snowboard team than Club Sports provided us through the university. They are experts at what they do. They bought in and wanted to see us win and did everything they could to help."

He considers the LMSC an ideal training ground for Club Sports student-athletes to take their sport to the next level.

"In my mind, Snowflex is one of the best places to learn skiing and snowboarding, whether you're a proven (professional) or a beginner in the sport," said Scheren, who founded but never competed on the team. "As a coach, I tried to do what I could to honor Liberty's mission and instill that spirit of building champions, both athletically and for Christ."

Ryan Leeds, Scheren's successor as head coach and LMSC general manager who now works as director of leadership training for Skiers & Snowboarders for Christ in Colorado, will serve as his presenter at Saturday's induction ceremony.

"I'm honored to have him introduce me," Scheren said. "He is a fantastic snowboarder, a fantastic coach, and a great friend. He picked up the torch and ran it further when I left, and only built on what we worked to create during my time as coach."

Leeds said Scheren was a perfect fit for the role he played in launching the ski & snowboard program and creating a spirit-filled atmosphere on Liberty Mountain.

"He is incredibly passionate about snowboarding and growing the sport to become much bigger than it was in Lynchburg, and he created a really good culture at Snowflex from the get-go," Leeds said. "He maintained a really good balance when he started coaching of wanting to improve riders' skills, but also remembering that snowboarding is supposed to be fun."

Leeds said Scheren used his relational skills and other giftings in videography and digital media to promote the program, glorifying God in the process.

"He was always super accommodating to other teams when would go on road trips, to go out to dinner together and create relationships," Leeds said. "Now, he's definitely really involved with the media side of things, making sure what's going on at Liberty is known to people outside of Liberty. He's really talented at capturing stories and emotion and helping OSD to grow its online spiritual leadership base."

As a videographer at Snowflex, Scheren was always "really good at thinking outside of the box," as well as "capturing the excitement of the sport," Leeds said.

"He was definitely instrumental in getting the team involved in that Red Bull Rivals (videography contest series)," Leeds said, "He loved that kind of stuff and is really passionate about this industry. He lit the fire under us to get the video entries in (to the Red Bull Reel Snow bracket challenge). We were a team that always went to traditional events. This was an untraditional event, but we really enjoyed filming and capturing and showcasing that talent."

Scheren came back to serve as an assistant coach for the Flames for one season.

"He loves the team so much that he wanted to get reconnected and reacquainted," Leeds said. "His passion for the individual is pretty infectious. He gets a lot of people excited and was a really good coach because he didn't just care about growth of the athlete in the sport," but mainly about their progression in all areas of life.

He helped set the tone for the program from the start and gave it the momentum to make an impact both regionally and nationally. Under his watch, Liberty hosted and traveled to events in the Collegiate Freestyle Association (CFA) as well as staging the Dew Games and Snowflex Games, and made the first and second of what has become annual appearances at the USCSA National Championships.

"We were pretty fortunate, those of us who were around when Snowflex got installed were people who were really passionate about skiing and snowboarding and wanted to improve and were riding every night," Leeds said. "We saw a tremendous amount of growth. It definitely attracted people outside the Liberty community, and we formed a lot of strong relationships with people who weren't Liberty students, which was a really cool way to (witness). Everybody that came knew we were followers of Jesus, and that we weren't weird people, but we liked the same type of things they did, including skiing and snowboarding." 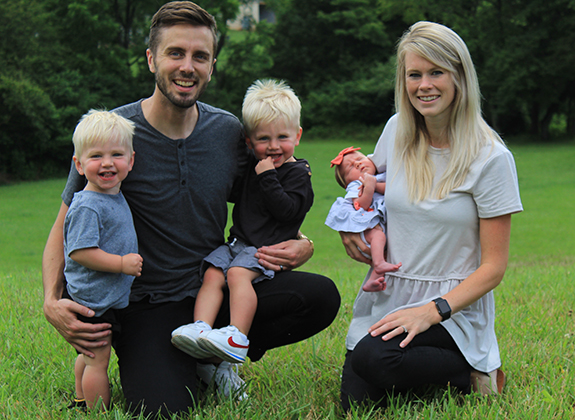