Flames swimmers to showcase depth of talent at Natatorium 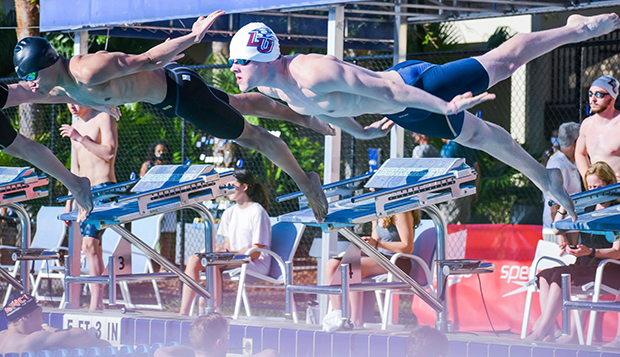 Liberty University's men's swim team will host the Liberty Collegiate Cup as a satellite event of the College Club Swimming virtual national championships this Friday through Sunday at the Liberty Natatorium.

The Flames' 19 swimmers will compete against 26 others from North Carolina State and 10 from James Madison University registered for the meet, with podium finishers honored at the meet and all times submitted into the virtual national championship pool.

"The meet is designed to try to preserve that spirit of in-person competition, which is pretty important to us," Flames Assistant Coach Blake Dunson said. "Psychologically, being able to visualize the competition is definitely a big motivating factor, as well as the adrenaline associated with an in-person meet."

The meet will feature a championship format with finals sessions set for 6 p.m. Friday and Saturday and 4 p.m. Sunday, after preliminary sessions at 10 a.m. Saturday and 9 a.m. Sunday. Liberty will have an even split between its sprint and distance swimmers, with at least one representative in all 22 events, including five relays.

Typically, close to 120 teams participate at the CCS national championships, but due to COVID-19 restrictions that canceled the 2020 nationals, many teams are not allowed to race in intercollegiate meets this year.

Clemson and the University of Florida will swim in another satellite meet at Georgia Tech, which was originally scheduled to host the CCS National Championships, as it did in 2018, when the seniors on this year's Liberty squad were freshmen.

Additionally, teams from Elon, Florida State, Georgia, Grand Canyon University, Indiana, Kentucky, Maryland, South Carolina, Texas A&M, Virginia, Wisconsin and others will be swimming against the clock, rather than outside competition, with entries submitted into the virtual national championships.

All of the different sites are required to be CCS sanctioned, in a competition pool with appropriate officials and stroke and turn judges. Final national championship results should be available as early as April 19.

"We would much rather see the competition settled in person," Dunson said, noting that he and Grishaw are hopeful that the Liberty Collegiate Cup will be offered again next winter or spring as a mid-season invitational and qualifier for a national championships to be held at one central location.

Only 250 spectators will be allowed in the Liberty Natatorium at any given time, with most of those spots reserved for family and friends of the swimmers.

Dunson said the high-tech features of the facility will give the Flames a home-pool advantage.

"We've got a very exciting facility to swim in," he said. "Anything we get to host is appealing just because of the quality of the pool that we have. It is definitely a fast pool and we are blessed to have it. We are very proud of the steps that Athletics and Club Sports have taken in making sure we have a safe environment to train and compete in, in spite of the risks and restrictions associated with COVID-19."

Returning from a strong showing at last weekend's American Spring Classic in Florida, the Flames are prepared to peak for their final competition of the 2020-21 season.

"We've got a good group of guys who can score in most strokes and distances so we're excited about it," Dunson said. "We are definitely optimistic that we will have a good atmosphere and some fast competition in (the Natatorium) and will be able to race at our best."

At the club meet in Tampa, Fla., Flames junior Matt Matthew Davidson had the most impressive individual results, winning the 50-yard backstroke and 50 freestyle, placing second in the 200 free and 200 back, and third in the 100 back and 100 free.

Senior Robert Boehme also came in second in the 1000-yard free; freshman Jonathan Tonnell took third in the 50 back; senior captain Ben Klipp finished third in the 50 butterfly; and Liberty placed second in both the 200 free and 200 medley relays.

"I would argue it was the best meet we've had in the four years been here," Flames Head Coach Heath Grishaw said. "We hadn't been able to compete, but the guys have been doing a good job of training and recovering and should be even more rested and ready to go for this meet."

This weekend's meet will be the last collegiate competition for Klipp, graduate Noah Miller, and senior Caleb Rice. Grishaw and Dunson are trying to locate a long course meet for Davidson to enter this spring in order to qualify for the Olympic Trials in Lincoln, Neb., in June. 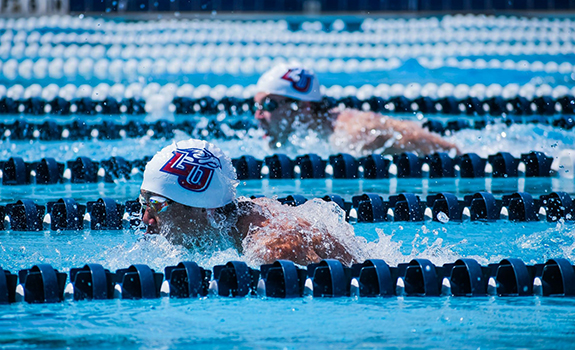