Men's volleyball unbeaten in pool play, bows out in playoffs 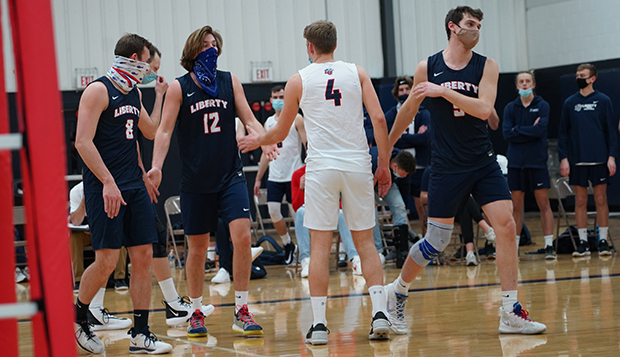 Liberty University's men's volleyball team concluded its 2020-21 season by going 3-0 in pool play to advance to the gold bracket of Saturday's East Coast Classic tournament at the Indoor Sports Center in Virginia Beach before losing in the quarterfinal round of the single-elimination playoffs.

The Flames were seeded third on their net going into pool play, where they defeated a pro team from New York, 2-1, and another solid adult team from Pennsylvania, 2-1, before sweeping their third opponent to win their net and secure the third seed in the eight-team gold bracket.

Offensively, they were paced by junior setter Tommy Speelman's 60 assists, opposite hitter Josh Knapp, who had 24 kills and hit at a .447 clip, senior outside hitter James Morton (16 kills), and freshman libero Mason Ellenberger (20 digs).

The playoffs were a different story as the Flames faced even stiffer competition and were eliminated in their first match.

"The playoffs just saw a whole new level of play from some big teams," VanDePerre said. "We battled tough through the match but just couldn't produce enough serve pressure and their outside hitter scored almost every time he touched the ball. I was really proud of the way we conducted ourselves in some chippy matches and saw a lot of mental and emotional maturity from the boys."

Liberty ends its season at 9-2 and sends off seniors Morton and outside hitter Sean Taggart.