Flames to meet McKendree in St. Louis to prep for nationals 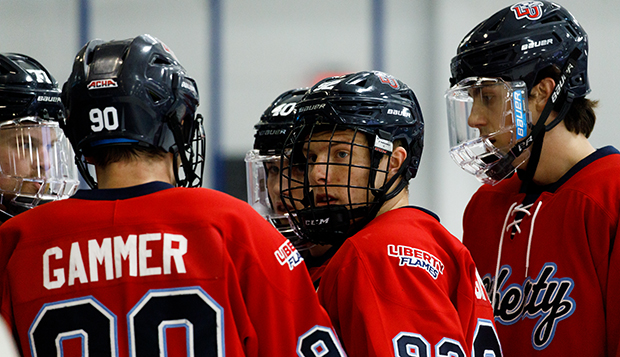 Before opening the ACHA Division I National Championships with an April 16 matchup against No. 13-seeded tournament host Maryville, Liberty University's No. 4-seeded ACHA Division I men's hockey team will take on No. 16-seeded McKendree on Tuesday, April 13, at 3 p.m. EST in St. Louis.

"We are excited for the opportunity to play another game before the actual national tournament because we have already had two weeks off," Flames Head Coach Kirk Handy said. "We felt it was a game we really wanted to get so the guys could be back in game mode before we get into the national tournament."

It will be the first meeting between Liberty (9-4, 7-3 ACHA DI) and the Bearcats (4-6), who will make their first-ever appearance at nationals with an opening matchup against top-seeded Adrian.

"It will be another opportunity for our guys to go out and compete, especially this year with COVID," Handy said. "We haven't played as many games as usual, so when you do, you want to make sure the guys are dialed in and focused."

After a full week of practice, Liberty will hold an intrasquad contest this coming Friday, April 9, at the LaHaye Ice Center, before holding one last practice on Sunday and traveling to St. Louis on Monday.

"That is going to be beneficial for our guys, to make sure they have a game mindset," Handy said.

The Flames will have opportunities to practice in the Maryville University Hockey Arena, located in Chesterfield, Mo., on Wednesday, April 14, and Thursday, April 15, before taking on the Saints that Friday at 11:15 a.m. EST.

"It will come down to us executing our game, especially on special teams," Handy said. "This time of year, your goaltending and special teams, both the power play and penalty kill, has to be great."

expects Liberty's players to be prepared to peak at nationals in all facets of their games.

"We have been trying to navigate this time between our last game (against Ohio on March 20) and nationals and have worked with (Strength & Conditioning Coordinator) Chris Kerr to have our guys at the top of their game, physically, mentally, and emotionally as we go down the stretch," Handy said. "I really believe we will have our guys in a great spot when we go down to St. Louis. We believe in our guys and are confident that they will be ready to work together to do something really exciting."

All 15 games at the ACHA DI National Championships, as well as the other 54 in the DII and DIII men's and DI women's tournaments, will be webcast live on the Hockey TV website, which requires a subscription. Liberty's game against McKendree will not be streamed live.