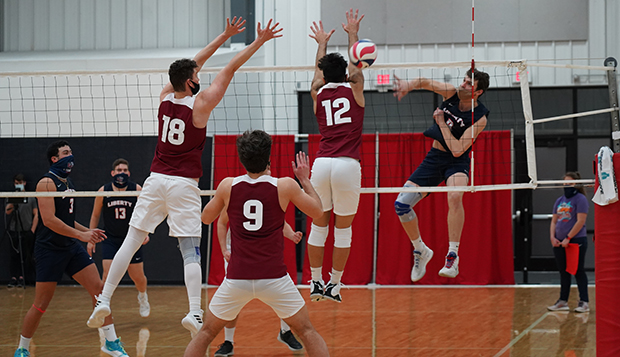 Flames outside hitter James Morton spikes through a block by Southern Virginia on Feb. 17 at Liberty. (Photos by Ted Allen)

"It was a lot of fun," Flames Head Coach Kaleb VanDePerre said, crediting Assistant Coach Maddie Anema and Graduate Assistant Zach Martyn for devising a good game plan to start the match and made a few effective end-game adjustments. "It was a great night for Liberty volleyball. Last year they beat us 3-0, and we have taken strides to get closer to them to be able to get over that hump."

Liberty (6-1) had lost the previous six meetings with the Knights over the past five seasons, including Feb. 17 in four games in its spring semester opener at the LaHaye Multipurpose Center. VanDePerre said defense was the key to the Flames' success in the rematch.

"I don't know that we had any major weaknesses," he said. "(Junior setter) Tommy (Speelman) spread the ball around pretty well and everybody was putting it away. Our coaching staff has been preaching defense lately and this was probably the first time for a full match that guys were pursuing the ball and getting dirty (making diving digs and saves.)"

SVU (13-3) is seeded first and is hosting its Continental Volleyball Conference tournament next week at the nearby high school since the ceiling in its home arena is too low, so it played Liberty there as well to get acclimated to the gym.

"It definitely is a home-court advantage when you know how the ceiling plays," VanDePerre said of playing in Knight Arena, where SVU is 5-0 this season. "I would equate it to hockey when you play someone on their Olympic ice. It gives them a home court feel."

He said the Knights made a number of uncharacteristic errors in the first game and the Flames were able to capitalize. Game 2 was neck and neck the whole way and Liberty bounced back from the two-point setback to win Game 3 by the same score before putting SVU away in four.

"They have a pretty big team, so they create a lot of energy," VanDePerre said. "Our guys did a really good job of playing on our side of the net."

He said Liberty's entire lineup avoided dwelling on mistakes, instead learning to hit the reset button.

"We've been focusing on eliminating errors compounding on themselves so if you make one, blow it off and take care of business on the next point, and they did that pretty well tonight," VanDePerre said.

Freshman Mason Ellenberger, normally a setter, made his first start at libero and carried the Flames defensively with his 18 digs.

"Our passing was spectacular and Mason was phenomenal," VanDePerre said. "That was probably the best defensive performance since I've been coach and he was the most impressive player on the court tonight. He was all over the place. He commanded the defense well, talked well, and looked a lot more experienced than a freshman getting his first start at libero. He covered well and his service receive was phenomenal."

Junior opposite hitter Josh Knapp paced the Flames' attack with 16 kills while senior outside hitters Sean Taggart and James Morton added 11 kills and 3 blocks and 9 kills and 2 blocks, respectively.

"Josh played his best offensive match of the season," VanDePerre said. "He was super consistent. He would have 4-5 good plays and then an error and 4-5-6 more good plays."

Junior middle hitter Ben Dowd returned from a three-week mission trip to Kenya with Liberty's School of Nursing and gave the team a morale boost, along with the Flames other middle hitters, junior Luke Marine and sophomore Tait Lapham.

"It was his first match in a month and for not having practiced or been around the game for a few weeks, he was a spark," VanDePerre said. "We were glad to have him back, and to see him telling the guys stories on the bus ride about his trip. We all missed him, but it was cool to see another unique thing that Liberty offers, getting to go to spread the Gospel and serve the Lord and then be able to mesh back in with the guys."

Liberty will travel to Virginia Beach this weekend for its final tournament of the season, the East Coast Classic, where it will have 13 teams in its division, including Virginia Tech and a Virginia alumni team.

"If we finish in the top eight in pool play, we make the gold bracket, and if we're in the bottom five, we'll be in the silver bracket for playoffs," VanDePerre said. "We have a couple really tough matches we're excited for, so we'll see what it takes. When we play our best, we're a pretty tough team to beat. We are excited to carry the momentum from tonight into the weekend and send these seniors (Morton and Taggart) off with a bang. It will be a sad day to lose those two. Those guys have been our glue for the last three seasons." 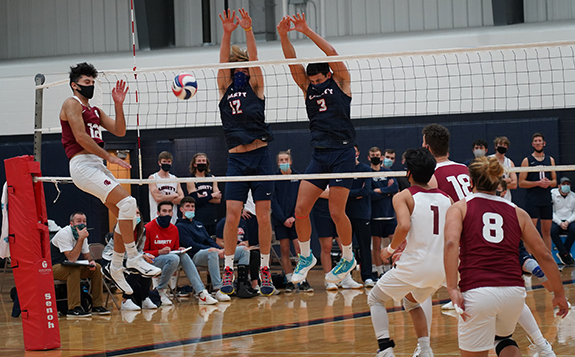 Flames setter Tommy Speelman (12) and middle hitter Luke Marine go up for a block against SVU.