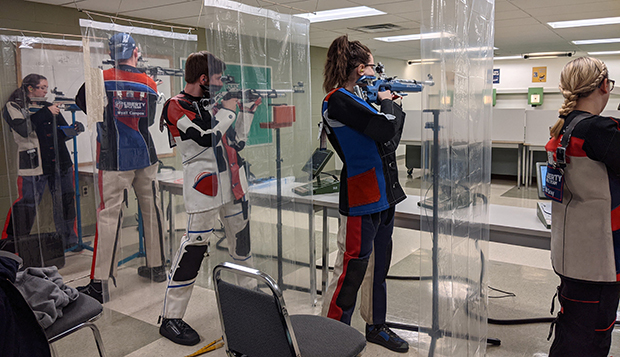 Liberty University's rifle team sent a squad of five representatives to the University of Akron (Ohio) for this past Friday's through Sunday's Western Intercollegiate Rifle Conference (WIRC) Championships. In their second year competing, the Flames and Lady Flames came away with third- and fourth-place showings in the smallbore and air rifle categories, respectively.

"It was wonderful to be able to go and compete as a team and have that experience," Head Coach Marlene Gray said. "This year's team motto is ‘Fight for Every Point!' and our athletes worked really hard at this competition, so I was super proud of them. We've been training since September for this competition and they all peaked right when they needed to, so it was nice that they put it all together and their scores reflected that."

The Flames and Lady Flames shooters had several personal-record scores which contributed to the team's PR air rifle total of 2,234 points. In the monthly postal competitions, Liberty posted its highest smallbore team score in December with a 2,187 total.

Individual PRs in the smallbore event were set by Gagne, who shot a perfect prone position score of 200 points; and junior Katherine Gray, who fired a 524 total score (out of a possible 600) in the three positions, followed by freshmen Madeline Ashley (519) and Wyatt Campos (504), who also shot PRs in the air rifle event with respective scores of 542 and 534.

Gagne and Donoho finished in a three-way tie for first place in the air rifle competition with identical scores of 579, which for Gagne was also a record high.

Liberty also had three students honored in the most improved category, based on their performance over the weekend compared with their regular-season postal scores: Gray (first in smallbore, 568.2); Ashley (second in air rifle, 581.5, second smallbore, 558.1); and Campos (fifth in air rifle, 534.7).

Liberty will next send the same five shooters to compete in the American Smallbore Shooting Association (ASSA) Intercollegiate Rifle Club Championships set for April 10-11 in Fort Wayne, Ind. That competition, which will take the place of the NRA National Championships this year, will include both individual and team events in smallbore three-position and precision air rifle at the X-Count indoor range. It will be open to all collegiate athletes and teams.