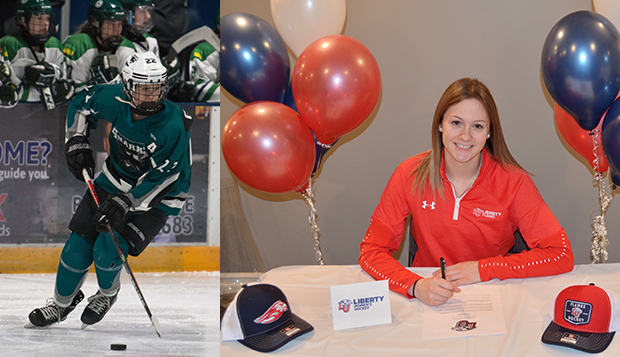 Madison Glynn, who has played the past four seasons with the Battleford AAA Sharks, signs her LU letter-of-intent.

"We are excited to be adding Madison Glynn to our incoming class," Lady Flames Head Coach Chris Lowes said. "Maddy is a great athlete and I am excited for what she brings to our team."

Glynn is the third defenseman Lowes has received a commitment from for the 2021-22 season.

"This is a big year for us with some key defenseman graduating," Lowes said. "Maddy, along with our other two commits on defense (Peyton Carle from Ottawa and Samantha Peebles from British Columbia) put us in a really good spot moving forward. The future is bright."

Glynn, who scored 11 goals and distributed six assists in her last 32 games with the Sharks this season and last, has also played volleyball and competed in track and field in high school and advanced to two national championships in softball, winning the Saskatchewan Provincials in 2019.

She opted to pursue a collegiate career in hockey because of the impression Lowes and his coaching staff made on her, even remotely through virtual communication.

"I chose Liberty because although I was not able to visit the campus due to travel restrictions, I was able to see the community atmosphere created within the team through many phone and video calls," Glynn said. "They care for each other not just as hockey players, but as people and that is a team community that I would love to spend my university hockey career with."

She plans to study exercise science with a concentration in therapeutic science with hopes to become a sports team trainer or physiotherapist.

"Liberty provides the schooling I am looking for as well as a competitive hockey team, with both providing me the opportunity to succeed with my future goals," Glynn said. "I am most excited about the step into the higher level of hockey and how it will allow myself to grow as a person and a player."

Lowes expects Glynn to emerge quickly as a disruptive force among the Lady Flames' defensive corps.

"Maddy is a very good two-way defenseman who excels at both ends of the ice," he said. "She is one of the top defensemen in a very good league in Saskatchewan and I believe the transition to college will be smooth for her. Her size and athleticism will allow her to defend the top players in our league and her skating, awareness, and shooting ability will provide her with chances for production in the offensive zone."

As her statistics show, Glynn considers herself an offensive-minded defenseman.

"I try to make consistent breakout passes and protect the defensive zone as well as be a threat in the offensive zone using my high hockey IQ to be a playmaker and my hard shot to score goals," she said. "I will bring strong determination and competitiveness to the team as well as being a good positive teammate while always striving to make my teammates and myself better."  Lowes believes Glynn will help the Lady Flames continue to raise the bar in pursuit of excellence both on and off the ice.

"Maddy checks all the boxes for a student-athlete here at Liberty," he said. "Everyone we talked to throughout the process spoke highly of her as a student, teammate, leader, and athlete.  I am excited to have her here on campus and watch her grow as a player and person." 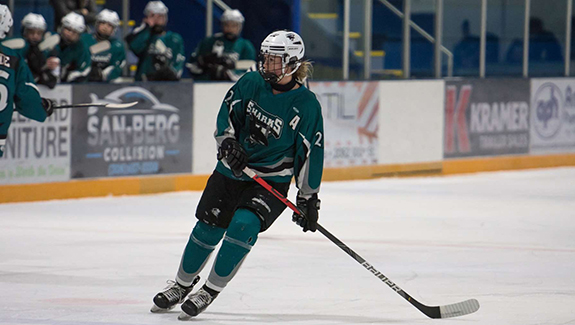