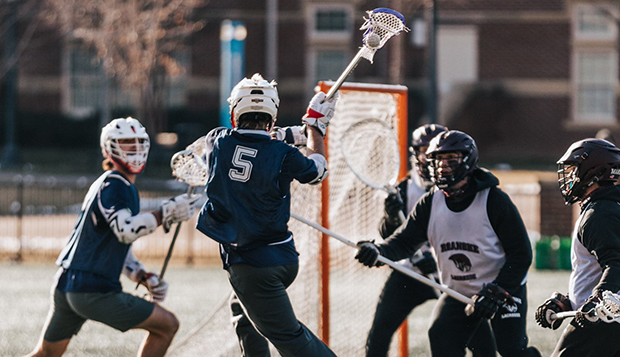 In a 15-12 triumph over the Maroons that featured plenty of momentum swings, Liberty made consistent strides from last weekend's scrimmage at Southern Virginia University, but still showed room for improvement in many areas.

"The guys played well," McQuillan said. "They were still a little sloppy, but it is early in the year, and these games are great to get us some film to work with. It was definitely an improvement over last week, so we're trending in the right direction and are looking forward to March when we'll be playing some more meaningful games that count toward our end-of-the-year record."

Offensively, Liberty benefited from having faced a similar type of defense at SVU.

"Roanoke is traditionally one of the better teams in the ODAC, and it is pretty similarly built as Southern Virginia in terms of styles of play," McQuillan said. "It was a good test for our guys. We learned a lot in our last game against SVU that we were able to put into practice today because of those similarities. On the offensive side of the ball, we showed good patience, and when we did run our offense, it seemed to be very successful."

He did say that  the Flames let the Maroons beat them to the ball on too many occasions.

"That was one of the areas of weakness, that we didn't do a good job of winning the ground ball battle," McQuillan said. "We need to improve in that area, which is just a testament to who wants it more. You can go back to practice and work on fundamentals, but basically, ground balls are just about effort."

McQuillan said the Flames still must improve their assertiveness on both sides of the ball.

"There was a lack of physicality from both our offensive and defensive players," McQuillan said. "We had opportunities to create some turnovers by sliding aggressively on the defensive side of the ball, but we didn't take advantage of that. On offense, as soon as you turn ball over, the attackmen turn into defenders and can use an aggressive ride to create some turnovers, but we did not take advantage of that."

He said Roanoke's style of play set an excellent example for the Flames to follow in the future.

"They definitely pride themselves on being a blue-collar team, with a lot of tenacity and grittiness," McQuillan said. "You can tell that in the way they fought for loose balls and played the game. It was good for our guys to see. They've got to be able to stand their ground and have the willingness to fight for every opportunity. NCAA DIII teams have that mentality, and playing Roanoke was a good reminder to us that it is not always the best players that come away with the ball, but the guy that works the hardest."

Senior goalie Ryan Reynolds turned in another stellar performance in the net, helping the Flames form an effective counterattack to Roanoke's 10-man ride by clearing the ball as quickly as possible.

"He did fantastic for us in the cage, making big saves and sparking our transition game the other way," McQuillan said. "That's one thing we are trying to emphasize with everybody, that if we can turn a big save into a transition opportunity, that is a good way to shift momentum and get things rolling back in your favor."

Offensively, the Flames showcased the depth of talent on this year's team with extremely balanced scoring. Sophomore attack Nate Spears came off the bench to provide a spark with two goals.

"We have players up and down our roster that I have to shake my head and ask, ‘How do we get these guys more minutes?'," McQuillan said. "Guys like Nate and Mark Rolewicz are going to be a big part of the future of Liberty Lacrosse, and days like today, where they can get some quality minutes, are super valuable. It was awesome to see guys like Nate really capitalizing on the time he was given."

Liberty is scheduled to host Indiana University on March 5 at the Liberty Lacrosse Fields, but if IU can't make it due to COVID-19 restrictions, the Flames may start and end their regular season against Virginia Tech, opening the slate that day in Blacksburg, Va., before hosting the Hokies on April 24.