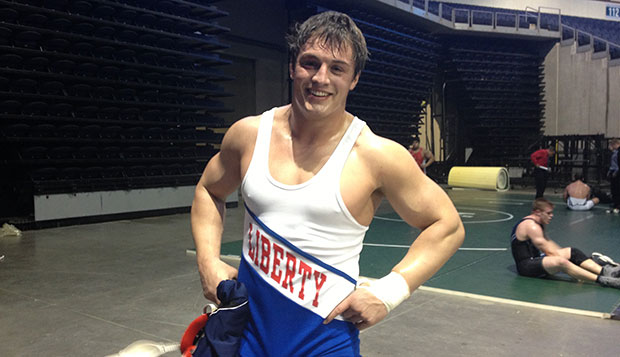 The Flames had a fruitful four-day harvest in their second national tournament of the year, after placing second at the NCWA national duals, Jan. 18 in Georgia. They reaped one national champion, two runner-up medalists, two third-place consolation prize winners, one fourth-place finisher, and one seventh-place showing to amass 130.5 points and finish third behind California Baptist (145.5) and McKendree (Ill., 139). Liberty's total was just two points ahead of fourth-place Lindenwood-St. Charles (128.5), the team that defeated it in the national duals final.

"It's been a great weekend, honestly," Liberty head coach Jesse Castro said. "I'm real proud of the team. So many things had to come together for us to take third place. On paper, we didn't have the firepower to challenge for first place, but to have seven all-Americans was phenomenal."

That much representation, with seven finalists on the national stage, made for a spectacular Saturday.

"It was a great environment," Castro said. "It was really, really well done. In the finals, the raised platform really added to it. That's what the NCAAs did this year."

One year after his national runner-up finish at heavyweight, Wilson (24-2), a senior from Anchorage, Alaska, remained on the offensive to cap his Liberty career with his first national title, edging Lindenwood-Belleville's Dustin Fullerton 3-2 in the 235-pound final.

"He stayed on the attack and took the kid off balance on his feet," Castro said. "That kid was the returning national champion at 235. He actually beat two national champions on his way to the championship. In his semifinal, he beat the 2011 champion, Josh Woods from Central Florida. That's why I voted for him to be tournament MVP."

Wilson was unfazed by the distractions around him and rose to the occasion in the final.

"When you come to a tournament like this, the pressure is unbelievable, to compete in front of thousands of people," Castro said. "Having the experience being in the finals before was helpful to him."

Liberty junior Aaron Thompson (22-6), the Flames' only returning national champion and a Mid-Atlantic Conference winner at 197 pounds, came one point short of defending his crown, falling to McKendree's Julian Smith (32-6), the Great Lakes Conference champion, 3-2 in the final.

"I thought he wrestled a little conservative," Castro said. "It was a battle, but he could have been a little more offensive. The kid he wrestled was pretty short, stout, and strong. Aaron had to do a little more to open it up and he couldn't get it done."

Flames freshman Marcus Miller, a Liberty Christian Academy graduate, was one of the biggest surprises in the tournament, also claiming second-place honors with an extremely close match in the 157-pound title bout. Facing Central Florida's top-seeded Santiago Martinez, he held his own in a defensive struggle before falling 2-1.

"That was huge," Castro said. "Marcus did a terrific job. He superseded his sixth-place seeding, beating the No. 3 seed and No. 2 seed. (The final) was a real tight match. It was a battle the whole time. I think the kid won on a one-point escape and got one point for riding time."

Liberty junior 184-pound wrestler Royal Brettrager, another returning runner-up from last year, was one of two third-place finishers along with Bobby Clymer at 165. Brettrager, who lost a 16-14 shootout to Marion Military's Terrence Smith in the championship semifinals, fought his way through the consolation bracket with three pins and a 7-3 decision over Navy Prep's Ryan Harman in the semifinals. Finally, in the third-place bout, he pinned McKendree's Luis Alba in three minutes flat.

"With Royal's personality, he leaves it all out on the mat," Castro said. "(In the championship semifinal), he wrestled hard but not smart. He scored a lot and was ahead two times in the wide-open match. But he didn't really control positions enough. To come back with three pins in the consolation bracket was crucial, because each pin is worth a bonus point."

Clymer, who wrestled through a shoulder injury that will require offseason surgery, also went 6-1 in the tournament, winning four matches by decision in the consolation rounds. The MAC runner-up defeated Apprentice's Philip Porto, a fourth-place finisher in the conference tournament, 12-5, before edging McKendree's Nick Haferkamp 6-4 in the semis and Grand Valley State's Austin Geerlings, the Great Lakes Conference champion, 9-4 in the consolation final.

"That is phenomenal," Castro said. "He was wrestling with one arm honestly, and pure guts. It wasn't pretty because he was so limited, but for him to take third with 60 percent of his arm, it was an unbelievable display of courage."

At 174, junior Keyshaun Ward who made it to last year's nationals but did not place, finished fourth, advancing to the consolation final with a 6-5 decision over Navy Prep's Forrest Pryzbysz before being pinned by McKendree's Isaiah Gonzalez just 1:30 into the third-place bout.

"The guys in the consolations really wrestled well," Castro said. "Keyshaun Ward, to have him placing fourth, that was huge because he wasn't a fourth-place wrestler on paper."

"Every single one of those matches was just a war," Castro said. "We were not a third-place team coming into this tournament, we didn't have the depth. We were only two points ahead of Lindenwood-St. Charles and it was Chase that knocked Lindenwood's (Ridenhour) out of the consolation finals or we would not have gotten third place. Everything came together as far as guys doing what we had to do."

For a complete list of teams scores and bracket-by-bracket breakdown of individual results, visit the NCWA website.