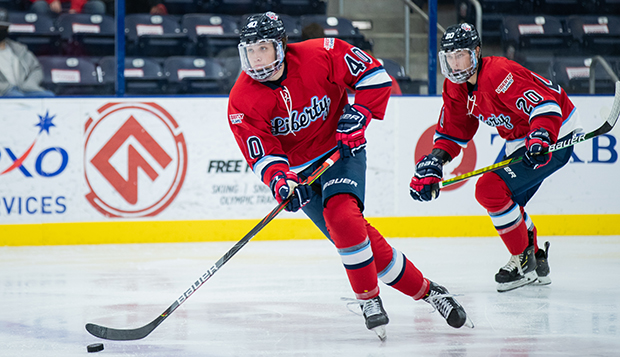 While most of Liberty University's ACHA Division I men's hockey team members have gone home following last week's fall semester final exams, Head Coach Kirk Handy and his staff are diligently revising the spring schedule for when the Flames return in early January to prepare for the ESCHL Tournament and ACHA DI National Championships.

The Flames had planned to open spring semester play against ESCHL rivals Delaware on Jan. 15-16 and New York University on Jan. 22-23 at the LaHaye Ice Center. However, those two programs have paused operations due to the ongoing pandemic, forcing Liberty to update its home slate.

"We've had Plan A, B, and C for our schedule," Handy said. "Plan A is out the window so now we are working on Plans B and C. Our goal is to play as many games as we can and to do it in a safe way so we can be at our best at the end of the year."

Maryville (Mo.) University will now come to Lynchburg, Va., on Jan. 22-23 before Missouri State's ACHA Division I team visits the LIC — in place of the Flames traveling to NYU to face the Violets — on Feb. 12-13.

Handy said with only three games on Liberty's fall schedule, the team struggled at times throughout this semester to stay focused on its long-term goals.

"It was hard in the fall because we knew we were going to have to send the guys home early," Handy said. "Once we get back, with more games on the schedule, it will give us a little more desire and drive."

Maryville, based in St. Louis, is a second-year ACHA Division I program led by former Arizona Assistant Coach John Hogan.

"They had a good year last year for a first-year program and I really feel like they'll be an opponent that will challenge us," Handy said. "They are definitely a big, up-and-coming program."

The Flames will begin their final season of ESCHL play with a Feb. 5-6 home series against Rhode Island and conclude their regular season against Ohio, March 19-20 at the LIC, after also hosting the Bobcats on Feb. 26-27.

Handy is still trying to add another regular-season road trip for the team, which is currently only set to travel to Ohio on Feb. 2-3 and ESCHL rival Stony Brook in Long Island, N.Y., on March 13-14.

He remains cautiously optimistic that the Flames will be battle-tested in the spring semester and ready to rise to the occasion and peak in the postseason.

"Obviously, we are going to have to be flexible," Handy said. "We are prepared to have our guys play as many games as they are physically able. Potentially, we will have some other changes as we go, and we are going to make the most of them and embrace the opportunities that we have to play. We are thankful that we are able to play."

He said the first ACHA Division I regular-season poll, which determines the national championship field, has yet to be released, and the format for determining the ESCHL autobid to nationals — normally decided by the regular-season champion — may need to be tweaked.

"We've got five teams in our conference that are playing, so that's still up in the air," Handy said.

It has also yet to be determined where the national championships will be played. Originally, Boston was going to be the tournament site for all five of the ACHA's divisions — DI, DII, and DIII men and DI and DII women. However, as a precautionary measure due to COVID, all five divisional brackets will be played at different locations, to be determined. 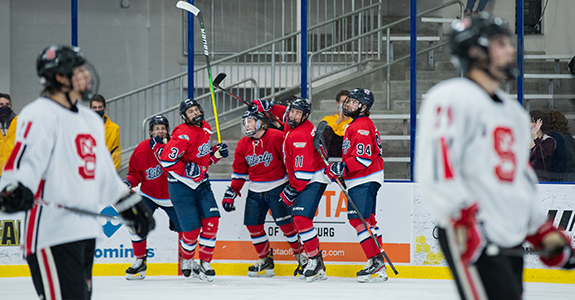 Liberty players celebrate a goal in the Oct. 23 victory over the Ice Pack at the LaHaye Ice Center.