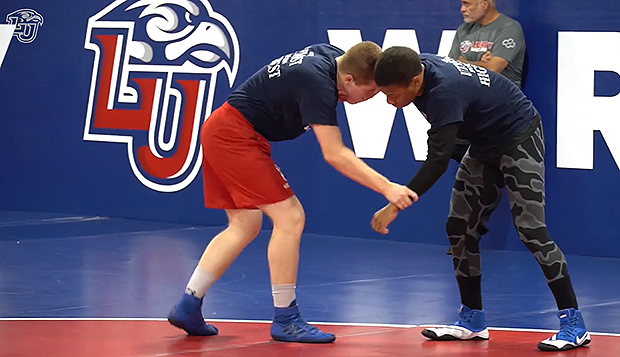 Since claiming its third consecutive NCWA National Duals title in late January at the LaHaye Ice Center and third straight NCWA Grand National tournament championship in Allen, Texas, in mid-March, Liberty University's men's wrestling program has moved into its new home in the Club Sports Training Complex while continuing to deal with health-related restrictions due to the ongoing pandemic.

The Flames were scheduled to travel to Williamsburg, Ky., for Friday's season-opening tri-match at the University of Cumberland, but a COVID-19 outbreak on that team forced it to cancel the event.

Head Coach Jesse Castro and his staff have overcome hurdles in their preparation for an uncertain season, welcoming what is arguably their most talented recruiting class since the program last competed at the NCAA Division I level in 2011.

"It's been a crazy year, obviously, and we are excited to get back on the mats," Castro said last week. "It's been a long time waiting. We've had the guys here since the end of August and improvising, going outside, keeping our social distancing that way. But a sport like wrestling is pretty hard to do with social distance, so we implemented some pretty high-tech air filtration systems and have been keeping a protocol by maintaining small groups. We're rearing to go and excited and look forward to competing."

Senior Chad Cantrell, the reigning 157-pound national champion who is a graduate of Liberty Christian Academy, said the process has tested the Flames' collective patience.

"Dealing with COVID restrictions, we had to do things by the book," he said. "It was a long wait and we got a little antsy to begin with, then we had to take another week off due to some guys getting sick, but we got back onto the mat and we're training hard and getting ready."

Freshman Jalen Fyffe, one of two lightweight recruits from nearby Brookville High School, has adjusted to college life and, like his teammates, is making the best of the situation despite limited competition.

"Starting off, the year isn't exactly the season we'd hoped it would be," Fyffe said. "But it's always a blessing getting after it on the mat. You've really just got to go with what comes at you and I think we've handled that pretty well, dealing with it and trying our best to make the season a good outcome."

He has enjoyed raising the level of his ability in the company of a great crowd of competitors in the Flames' wrestling room.

"The team culture, I've been around it a good while, coming here some in high school," Fyffe said. "It's definitely a culture you want to be around … being able to come out here every day and practice with these guys and seeing the work ethic they have, it's just amazing. A big thing for me is getting used to the college pace. It's high level and great technique with kids from all over. Being mentally prepared for it all, that's the biggest thing, and just going out there and getting after it."

Cantrell said replacing last year's senior class that included three-time NCWA national champion Austin Amos, among others, will be a challenge, but this year's recruiting class is up to the task.

"It's tough to lose guys like Sam Karel, Austin Amos, Dave Smith, all of those leaders who were here since I was a freshman," Cantrell said. "Now it's my job to help get these young faces on the right track, to maintain our culture. A lot of the guys here are working hard and I love to see it. They've got a lot of talent in this class and I am very excited to see what they can do."

Whether or not they will have the opportunity to show what they are capable of this season may be the biggest question.

"It's going to be a little different this year, obviously, with COVID and everything," Cantrell said. "We're not going to have as many tournaments, so we're going to be a little lacking in competition, but I don't doubt for a minute that we won't be ready to go out there and win another (national) championship. I still don't think that another team's even close to us."

Castro said the NCWA has already canceled its National Duals tournament in January and is requiring that at least 50 programs register for the 2020-21 campaign by the end of November in order to salvage some semblance of a season, capped by the NCWA Grand National event.

"We're kind of taking this a day at a time," Castro said. "All I know is our guys are eager to compete. We are planning as if it is going to happen … that the nationals will be in mid-March, and what I anticipate is another national championship. Obviously, a lot of things have to come into place. Everyone's dealing with the same thing that we are, but I think we have the depth this year to have another stellar performance."