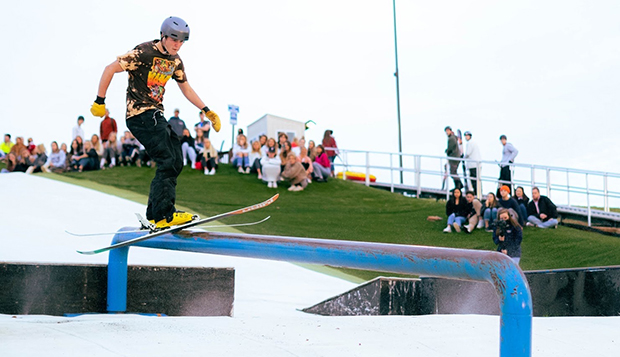 Saturday's final event of the fall at the Liberty Mountain Snowflex Centre, a Slopestyle competition, attracted 30 riders and skiers and 150 spectators, many in town for Liberty University's only College For A Weekend (CFAW) of the semester.

"We did have a high level of competition for the CFAW crowd," Liberty ski and snowboard Head Coach Isaac Gibson said. "The Men's Ski division was especially stacked, and the contest was very close between the top skiers."

There were also seven competitors in the youth division with Zaki Saberi winning the boys snowboard event followed by runner-up Geno Koluque, a Next Level Development Program participant, and third-place finisher Cavallo Caputo.

The competition, which combined jumps and rail features using the length of Snowflex's course, followed a Rail Jam on Oct. 9 and Big Air event on Oct. 24.

Liberty will plan to open USCSA Southeast Conference competition in January, but Gibson found out on Monday that the USCSA Mid-Atlantic Regional and USCSA National Championships in northern California in late February and early March have been canceled due to COVID-19.

"With these two major events being canceled, I am looking towards trying to plan some service trips for our team to utilize our freed up schedule and give back to the ski and snowboard community in ways we have not before," he said.