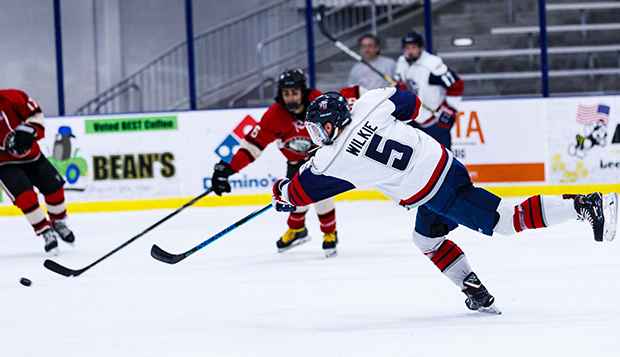 Junior forward Charlie Wilkie launches a shot from the high slot that gave the Flames a 5-2 lead in Friday night's opener. (Photos by Ross Kohl)

Liberty University's ACHA Division II men's hockey team erased memories of a season-ending setback to North Carolina State in the 2019 Southeast Regional tournament and a showcase loss to the Icepack last season by staging a resounding 6-2, 5-1 sweep on Friday and Saturday nights at the LaHaye Ice Center.

In the first game, with the Flames (2-2-1) on a power play, sophomore forward Josh Wagner started the scoring less than four minutes after the opening faceoff by skating through the middle of the ice, faking a pass, and lifting a wrist shot into the top-left corner of the cage, over the sweeping glove of NC State goalie Eric Daniel. Then, with 2:31 left in the period, freshman forward Trevor Graznow netted a putback of junior defenseman Maxx Mitchell's shot from the top of the left circle that glanced off Daniel's pads for a 2-0 advantage.

Senior forward Ian 0'Rourke got the Icepack on the scoreboard at the 18:22 mark of the second period by following his own shot blocked by Flames goalie Dylan Cyhaniuk and sliding the rebound through the five hole, trimming the deficit to 2-1. Less than three minutes later, junior forward Riley Johnson stole the puck along the right boards near his own blue line and skated all the way in before beating Cyhaniuk with another five-hole finish from deep in the right circle, tying the game at 2.

The Flames reclaimed a 3-2 lead at the 10:00 mark of the second period, capitalizing on a 5-on-3 power play when junior forward Tim Doe swatted an assist from senior forward Michael Niederer past Daniel from near the left post.

After killing an Icepack penalty, Liberty added two goals in the final 1:22 of the stanza to seize a 5-2 advantage. Senior forward Blake Flanders rifled a shot after skating into the top of the left circle before sophomore forward Charlie Wilkie received a pass from Wagner and launched a wrist shot from the high slot 14 seconds before the second intermission.

Cyhaniuk made a great glove save with 5:11 left in the third before the Flames iced the victory on an odd-man rush with junior forward Justin Barstead receiving a pass from sophomore forward Christian Sorenson as he skated through the slot and lifted a backhanded shot past Daniel top-shelf with 4:41 to play.

The Flames needed less than a minute and a half to start the scoring in Saturday's rematch when junior forward Peyton Nash received a stretch pass out of the defensive corner from Graznow and finished a breakaway through the five-hole of Icepack goalie Joshua Cannon.

Sophomore forward Luke McFarlane pushed Liberty's lead to 2-0 with a shorthanded goal at the 3:00 mark, capitalizing on a mishandled puck by Cannon by finishing a top-shelf putback after skating through the slot.

Johnson put away an entry feed from O'Rourke at the 18:08 mark of the second period, cutting the Icepack's deficit to 2-1, but that was as close as NC State would get. Doe received a pass from sophomore forward Aaron Partridge and gave the Flames a 3-1 lead with an amazing move in the right crease, pivoting around a defenseman before following his backhanded miss by sticking in the putback from out in front with 13:16 left in the second.

A second shorthanded goal all but sealed the victory for the Flames when Doe skated down a long clearing pass from junior defenseman JD George and finished with a howitzer of a slap shot past Cannon from in the right side of the slot for a 4-1 advantage with 14:21 remaining in regulation. Flanders capped the scoring with 12:26 to go, following his own blocked shot by collecting the rebound near the left post, skating behind the cage, and lift a sharp-angled finish past Cannon from the right endline for the 5-1 final.

The Flames will resume ACHA play Jan. 8-10 with three games at the Miami (Ohio) Showcase.