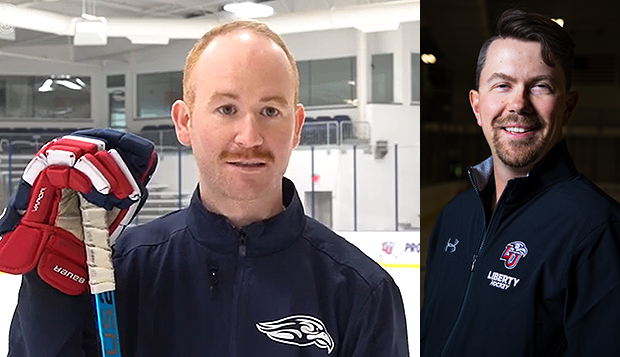 There will be a sense of normalcy in the LaHaye Ice Center (LIC) this weekend as Liberty University's ACHA Division II and DIII men's hockey teams both host two-game series against rivals from North Carolina and South Carolina, respectively.

On Friday and Saturday at 6:30 p.m., the DII Flames will entertain the same NC State team that Liberty's DI men's team opened its season against with a 7-2 triumph on Oct. 23. The Icepack have defeated the Flames' DII squad at the LIC the last two years, denying them a sixth straight bid to the 2019 ACHA DII National Championships by ousting them in the second round of the Southeast Regional tournament before snapping Liberty's 8-0 start with a 5-3 setback in last season's Fall Showcase.

The Flames' DIII team will open its season with its only two tests of the fall semester, against Coastal Carolina, after Friday's and before Saturday's DII games, with the puck dropping at 9:30 p.m. and 2:30 p.m., respectively.

After eliminating Liberty from last season's ACCHL tournament, the Chanticleers moved up to the ACHA DII level this season. The series will mark the head coaching debut for longtime DI women's hockey assistant coach Josh Graham, who has a talented mix of freshmen recruits and veteran returnees to work with.

Admission is free for all four games over the weekend, which will also be streamed live by LFSN.